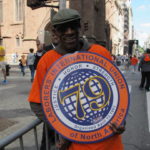 Day parade Sept. 9 had a special urgency this year: The Trump administration’s anti-labor policies, the increasing deportations of immigrant workers, and the potential threat to pensions and prevailing-wage laws from a state constitutional convention.People “know that labor is under attack like never before,” New York State AFL-CIO head Mario Cilento told LaborPress. “It brings people together to recognize that there is power in speaking with one voice. When you have a day like today with public-sector, private-sector, and building-trades unions all joined together, it shows the real power of this labor movement and the reasons why we will overcome all those challenges and obstacles.”

“This year is different because of the many attacks against working people on the national level,” said 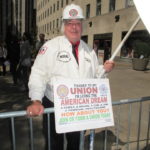 Janella Hinds, secretary-treasurer of the New York City Central Labor Council. “It’s time for us to once again come out and show our strength and our unity and our solidarity and our willingness to resist the attacks.”

The 20-block parade spotlighted the breadth of the city’s organized labor, from entertainment to retail, health care to construction, and public-sector workers including teachers, transit workers, and traffic enforcement agents. 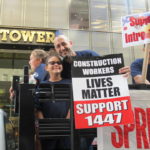 Council 37 members, from the Queens Library Guild to the Rent Regulation Services Employees, marched in green, except for the camouflage-clad social-service workers of Local 372. The United Auto Workers carried a “No Trump, No KKK, No Fascist USA” banner, and the city auto mechanics of SEIU Local 246 drove motorcycles and classic cars—a scarlet MG sports car, an orange Camaro SS, and a forest-green ’50 Chrysler Royal.

Ironworkers marched 20 abreast, along with plumbers, carpenters, floor insulators, elevator constructors, derrickmen, and riggers. Laborers Local 78 carried asbestos-warning skulls. The painters and plasterers of DC 9 wore white T-shirts with red and blue swaths down the side. A girl about 7 rode on a Steamfitters truck next to her father, shouting “638! 638!”

“We’re trying to keep it union and nothing but union,” said Howard “Youngblood” Lloyd, wearing an orange Laborers Local 79 T-shirt. “We can always use more union jobs. We do office buildings, skyscrapers, schools. We do everything. We’re dedicated. We’re professionals.”

“Everything we do is to protect workers, we’re going to continue to do that, and I’m just very happy to be 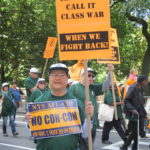 out here with all my brothers and sisters,” said Gary LaBarbera, president of the Building and Construction Trades Council of Greater New York.

“This is so awesome. I’m from L.A., and we can aspire to this,” said Cherri Sanders, publisher of the California-based Labor 411 buy-union guide Website.

For some, the parade was about the basic benefits of organized labor. “I was a nonunion actor before I was a union actor,” said Broadway and TV actor Todd Buonapane, 39, a member of Actors Equity. With a union, he said, “you get much fairer treatment and you’re able to make a living.”

Labor Day, said International Union of Operating Engineers Local 94 business manager Kuba Brown, is “the day labor comes out and shows the city we build it, we operate it, we maintain it, and we keep this country great.”

But this year’s “very important,” said Dennis Trainor, vice president of Communications Workers of America District 1, because “obviously, we have a Republican administration led by President Trump which is completely anti-labor.” “We need Donald Trump to understand we don’t appreciate his attacks on unions,” said E. Paul, a Bronx school parent coordinator and member of DC 37 Local 372.

“There’s a war on immigrants,” said Teamsters Joint Council 16 President George Miranda. “There’s a war on the workers, and both of them are synonymous. The message is that we’re pro-immigrant and pro-labor, obviously.”

“We are fighting for the 15-dollar minimum wage,” said Peruvian immigrant Zaida Paz, 64, an accountant for Workers United. “Our union is the garment workers’ union, so we are the ones who suffer more with imports. You know, most of our shops went overseas. We only have here the designers, the sample-makers, and the cutters. Before we used to have every single shop here.”

“To me, he’s a racist,” she said of Trump, “because he’s passing laws that affect most of the immigrants, most of the people like the Spanish, blacks, Chinese, everybody. We are the people who made this country big. Our work. He keeps saying that the government is supporting us, and that’s not true.”

Jahir Ochoa, 14, marched with his mother, a Mexican immigrant and Workers United member, and his younger brother. He said he was marching to fight for the rights of young immigrants protected by the Deferred Action for Childhood Arrivals program, which the Trump administration recently said it would phase out. “I may not be part of DACA, but I’m still fighting for it,” he added.”

Many marchers carried blue and gold license-plate-style signs reading “NYS AFL-CIO: NO CON CON.” “We have to make sure that we defeat the Constitutional Convention and vote no on November 7th,” said Cilento. “We have the strongest labor protections in our state constitution of any state in the country. Whether it’s pensions for public-sector workers, prevailing wage for building-trades workers, workers-comp protections and unemployment insurance, the right to collectively bargain, or civil-service protections, it’s very important that we maintain what we have.”

Losing that is a real danger, said Patricia White, director of IATSE’s education and training department, because a convention to rewrite the state’s constitution could be packed with financial interests. The current constitution guarantees that public-sector workers’ pensions cannot be reduced after they’re earned.

“This year is different from any other year we’ve marched before,” said Ann Toback of the Workmen’s Circle, answering what she called “the Passover question,” “because everything we’ve worked for for over a century is in jeopardy. Immigrant rights, labor rights. We’re marching today to make sure that our voices are heard and respected and count in this fight for some people’s very lives. For our right to work in safety, security, and with the protections of a union.”