Cuomo joins rally as battle between Related and unions heats up

Gov. Andrew Cuomo on Tuesday lent his support to a union rally against Related Companies — though he 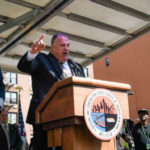 stopped short of joining chants of “Fuck Steve Ross” and “We just punched Related in the face.”

Though the governor adopted some of the bluster of other speakers at the rally, he didn’t mention the Hudson Yards developer by name while speaking before thousands gathered at Union Square. The Building and Construction Trades Council of Greater New York organized the event as part of its “Count Me In” campaign, which has largely targeted Related for its use of nonunion labor. At the rally, Gary LaBarbera, president of the BCTC, announced his organization’s endorsement of the governor, who faces off with Cynthia Nixon in September.

Cuomo didn’t wade directly into the group’s battle with Related, but he credited unions for electing his late father, Mario Cuomo, and for being the singular reason he’s served two terms as governor. He also pledged that “there will never be a state project that isn’t built with union labor” if he’s re-elected in November.

“You know how to build like no people on this globe,” Cuomo said. “No one builds with the skills and the ability of organized labor. If you want quality construction, if you want it done right, you want union labor.”

State projects have traditionally gone the union route, thanks to project labor agreements. PLAs, however, are open to union and nonunion contractors, so preventing nonunion companies from bidding on state projects would be illegal. Such agreements have drawn criticism lately, following a New York Times article published in December that detailed some of the perils — including cost overruns and delays — of exclusively using union labor on Metropolitan Transportation Authority projects.

“The politically connected Building Trade bosses who organized today’s rally are the same people whose selfish dealings with the MTA, along with their unapologetic advocate Governor Cuomo, have stood in the way of fixing New York City’s subway system,” Brian Sampson, president of the New York chapter of the Associated Builders and Contractors, a nonunion group, said in a statement.

The rest of the rally focused heavily on Related and the fact that the developer has chosen to hire both union and nonunion labor for the second half of its megaproject, Hudson Yards. One of the event’s speakers wore a Miami Dolphins jersey and explained that his outfit was a reference to the team’s owner and Related chairman, Steve Ross. He said the unions now “own Steve Ross,” eliciting chants of “Fuck Steve Ross” from the audience. Another union leader likened the rally to “punch(ing) Related in the face.”

Construction workers have been protesting near 50 Hudson Yards since last year, though on a smaller scale. The fight between Related and BCTC has escalated both in the streets and in the courts.

Related has filed two lawsuits against the BCTC and LaBarbera, one of which accuses the trade group of inflating costs at the project by $100 million. The other accuses the group of interfering with construction at 50 Hudson Yards by intimidating drivers delivering concrete.

“This is yet another example of the BCTC and its President Gary LaBarbera engaging in destructive and malicious behavior, including bullying tactics, that have hampered our ability to do business,” a representative for Related said in a statement. “As laid out in the complaint, their retaliatory actions against us have also inflicted damage on their own union members and union contractors forcing them to lose work and jobs that we had awarded to them.”

LaBarbera acknowledged the lawsuit at the rally, his voice growing hoarse from unrelenting shouting. He called all the claims “bullshit.”