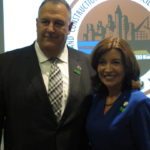 Hochul, who was a House member from the Buffalo suburbs before being elected as Gov. Andrew Cuomo’s running mate in 2014, is facing a challenge from New York City Councilmember Jumaane Williams in the Sept. 13 Democratic primary. The 100,000-member Building Trades Council announced its endorsement of Cuomo for a third term last week.

“She has stood up for massive infrastructure, rebuilding New York City and New York State. She’s stood up for the fight for $15, paid family leave, free college tuition, the list goes on and on,” Building Trades Council President Gary LaBarbera said at a meeting of the council’s executive board. “The Governor and Kathy have stood by our side on every one of our issues, bar none.”

Hochul touted her union-family roots, saying that when she was in her first elected office, serving on the town board in the Buffalo suburb of Hamburg in the 1990s, she was proud that it was the first place in New York State to require apprenticeship programs for any public project.

In the next election,” she recalled, people accused her of “making it so just unions can get the jobs.” “Yes, that is true. Guilty. That is OK with me,” she declared. “Because I care about the safety and the working conditions of the men and women who are taking taxpayer dollars and doing the work for the people.”

Hochul also stressed her support for infrastructure projects. The federal government has a responsibility to send money to the states for them, she believes, because the states can’t be expected to do it alone. “Upstate New York has so many fractured critical bridges that need repairs,” she said. “Bridges. Roads. The airports, neglected for decades.”

She got the loudest applause when she vowed to protect workers against “unscrupulous developers” such as Hudson Yards.

The only encouraging thing President Donald Trump has done, she added, was to promise to spend $1 trillion on infrastructure—but after a year and a half, no actual projects have materialized. New York State, which has committed $100 billion to projects such as expanding Penn Station and renovating LaGuardia Airport, is actually doing more, she said.

“Our President’s focus was not on the trillion dollars for infrastructure, giving Americans jobs,” she said. “He was deeply troubled by the fact that Chinese are going to be losing jobs.” She was referring to Trump ordering the Commerce Department to rescind the seven-year ban it imposed on the Chinese telecommunications company ZTE importing American components.

“If we hadn’t been screwed over by the Chinese, those 70,000 jobs would be American jobs today,” she continued, drawing a second round of cheers.