Bill Would Halt Misuse of Tests

Reprinted: UFT.org
UFT President Michael Mulgrew told the Delegate Assembly on May 16 that a bill to uncouple state 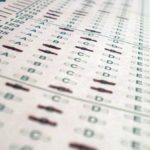 standardized test scores from teacher evaluations and delete them from students’ permanent records may be close to being approved by state lawmakers.

The bill, which the UFT and its state affiliate NYSUT had lobbied hard for, passed the Assembly on May 2 by a 131-1 vote. At press time, it was still being considered by the Senate, which is controlled by Republicans.

Current law requires that student results on state standardized tests be used to evaluate many teachers. A state moratorium is in place through the 2018–19 school year on the use of state exams in ELA and math for grades 3–8 to rate teachers. Under the new legislation, the use of all state standardized tests, including science and social studies tests and high school Regents exams, in teacher evaluation would no longer be required by law. Instead, the use of these tests would become a subject of collective bargaining.

For teacher evaluations, student performance could be measured instead by authentic assessments such as portfolios, performances and the like. The use of state standardized tests in teacher ratings would become a matter of collective bargaining in each school district.

The bill would also prevent these scores from being part of a student’s permanent education record.

“You’re in 4th grade. You have a bad day and do poorly on your ELA exam. Do we want that following that child for the rest of his life?” Mulgrew asked.

At the time of the DA, the legislation had at least 55 Senate sponsors and co-sponsors, including Republicans.

Mulgrew said within five days of the bill’s passage in the Assembly, the Senate introduced a resolution to increase charter funding and a bill to create tax-credit vouchers for private school.

The UFT and NYSUT, Mulgrew said, were quick to tell Senate lawmakers that linking the passage of the test score bill to pro-charter and pro-private school initiatives was unacceptable.