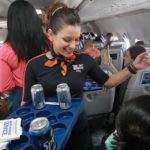 bear fruit this spring, as they vote on whether to join the Transport Workers Union.

Union supporters collected cards authorizing the TWU to represent them from well over half of the airline’s 4,800 in-flight crew members in less than four months last year, and handed them in to the National Mediation Board in December. The voting began March 19 and will continue until April 17.

“It’s an absolutely huge election,” says TWU President John Samuelsen. A victory at JetBlue would mean that flight attendants would be unionized at all of the top six U.S. airlines except Delta, where the International Association of Machinists has been organizing.

JetBlue’s workers have a “tremendous organizing model,” Samuelsen says. “The main thrust of the organizing has been done by rank-and-file in-flight crew members,” he explains. “We’ve given them resources, training, and guidance, but they’ve done the actual organizing.”

Lyndi Wade, a flight attendant from Massachusetts who has worked at JetBlue for 13 years, was one of the first to get involved, about nine years ago. Back then, she says, JetBlue still had the small, close-knit “culture that the company likes to preach about.” But for her, the turning point came when management representatives told workers that they would “never” remove a row of seats from planes—and the company announced the next day that it would.

That, she explains, reduced the number of flight attendants on a plane with roughly 150 passengers from four to three, both increasing their workload and making it harder for them to get flights to work on. Wade says she then realized that “the only way to get a voice in our flight group was to have a union.”

Union supporters cite several things they want to change. They are employed “at will” and can be fired without cause. They lack due process in disciplinary procedures. They have minimal protection if JetBlue merges with or gets bought by another airline. They generally make less money and work longer hours than flight attendants at unionized airlines.

In-flight crew members have “realized that being at-will employees is no longer a viable option,” says Brendan Moriarty, a Long Islander who’s worked at JetBlue since 2004. If a worker is facing a disciplinary meeting, such as after a passenger complains about them, he says, they can sometimes bring a witness to observe the proceedings—but they can’t have anyone actually speak up on their behalf.

“If we had a union, there’d be a grievance process,” says Michael Zuyus, a JetBlue flight attendant for more than 15 years. He calls it “job insurance.”

JetBlue’s media-relations office, reached by phone, asked LaborPress to email questions and then did not respond to them. B6Direct, an anti-union Website that claims to be operated by crew members independently, says unions aren’t needed to prevent people from being fired without just cause, because “we already make sure that is the case at JetBlue” and “every separation goes through five levels of review.”

Previous organizing campaigns failed to get more than half of the workers to sign union cards, the number needed to call an election. The tipping point, says Lyndi Wade, came last April, when news about the company offering a $25 voucher to passengers who complained about crew members using a cell phone on the plane “went viral within our ranks.” “All the flight attendants were disgusted,” she says.

Organizing was hard, says Moriarty, even though 2,200 of JetBlue’s flight attendants are based at John F. Kennedy Airport, because crew members are flying all over the country and don’t often see each other face to face. But last year, he adds, “we were finally able to recruit enough activists to take part in the effort.” Facebook was also a huge help, says Wade.

The campaign, begun in late August, handed in more than 3,000 signed union authorizations in early December. The crew members had “incredible depth in every JetBlue hub,” says Samuelsen.