A legacy of passion and commitment 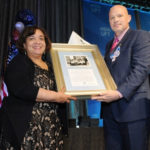 Award at Teacher Union Day, he praised her passion for advocating for special needs children during her 28 years as the UFT vice president for special education.

“She used her voice to constantly push not just the school system but the union also,” he said. “Members and children owe you a huge debt.”

Mulgrew also credited Alvarez with helping teach a new generation of union leaders. “She always took time to help me and mentor me when I was a vice president,” he recalled. “She showed me how you get things done inside of a union and a bureaucracy.”

His words dovetailed with Alvarez’s own prepared remarks about legacy, in which she discussed Cogen, the first UFT president, and his successors, up to and including Mulgrew, the fifth UFT president — and the seeds they planted that have borne fruit with each new generation of leadership.

Alvarez paid special tribute to the late Sandra Feldman, the former UFT president who appointed her as vice president for special education in 1990. But Alvarez said the union’s legacy runs through each member and the work they carry out.

“All of you are part of the Charles Cogen lineage of legacy,” Alvarez said in conclusion, before calling up her successor, MaryJo Ginese, to take the stage with her.

The day after the ceremony, Alvarez said the Cogen award celebration was “pure acknowledgment, pure joy.” She reflected on a journey that took her from engaged parent leader to resource room teacher to union vice president.

“We were the first to talk about how inclusion, when done well, can be excellent,” she said, recalling her support for Superstart Plus, a program created in the early 1990s to educate preschool children with disabilities with their nondisabled peers. That program evolved into inclusionary programs across all grade levels.

Alvarez longs to see the day when funding earmarked for special education cannot be blended with other school funds with no accountability for how it is spent.

She was unequivocal in describing the force of the union in advocating for students with special needs. “I’ve been here through six chancellors, and the only constant for special education has been the union,” she said.

Liz Truly, an attorney specializing in special education law, has worked closely with Alvarez for more than 30 years.

“We balanced each other out,” Truly said. “Her strength is member engagement, and mine is getting into the nitty-gritty of information to support members. We could finish each other’s sentences. And we were always up-front and honest with each other. It was a beautiful thing.”