A Decade After It Acknowledged its Role in FDNY Deaths and Injuries at the Deutsche Bank Building, Bovis Denies Responsibility 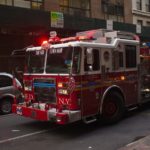 Bank building. Trapped in the maze like upper floors of the building by impenetrable barriers that sealed off the interior stairways, they died waiting for water that was never going to come.  Unbeknownst to the firefighters, months earlier, a section of the building’s standpipe system was cut away, and their water spilled uselessly into the basement, thousands of gallons of it. As fire companies worked to breach the plywood and steel platforms that sealed off the stairs, conditions grew worse. Robert Beddia and Joseph Graffagnino, trapped and out of air, perished inside the building. Other firefighters were injured as they tried to escape the building.

A decade after the tragedy, some injured firefighters are still litigating with Bovis Lend Lease LLP, the multinational corporation in charge of the project. But once upon a time, Bovis openly acknowledged responsibility for the terrible conditions the firefighters faced inside the Deutsche Bank building.

Investigations by the Occupational Safety and Health Administration and the New York City Fire Department found that the firefighter deaths and injuries were the result of numerous serious safety lapses including the non-functioning standpipe system, sealed stairways, and smoking inside the building, which was simultaneously being decontaminated and deconstructed.

As part of a non-prosecution agreement with the Manhattan District Attorney, Bovis acknowledged its responsibility for the firefighters’ deaths. It publicly admitted that it disregarded building and fire safety codes by sealing stairways and failing to maintain an operable standpipe system. But now that it is out of the District Attorney’s sights, Bovis is denying everything that it once admitted in the civil cases brought by injured firefighters.

Bovis, which has since changed its name to Lend Lease Construction LMB Inc., actually asked a judge to dismiss firefighters’ lawsuits, claiming, contrary to its earlier public statements, that there was a functioning standpipe in the building. The judge denied Bovis’s motion and said that a jury could award punitive damages against Bovis if it saw fit. Bovis is appealing the decision.

We help the 9/11 community apply for compensation. For more information, please call 646-893-4556 or visit www.wtclawyers.com.