Minneapolis, MN – It may have been Saint Patrick’s Day, March 17, but the sea of green in downtown 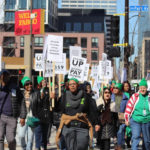 Minneapolis was not a display of holiday revelry, it was a sign of an important labor struggle, as over 200 AFSCME Hennepin County Medical Center clerical and technical workers, along with supporters, picketed to demand a decent contract.

The majority in attendance were rank-and-file women and workers of color represented by AFSCME Locals 977 and 2474. Both locals are led by strong women presidents. Carmen Brown of Local 977 and Sara Franck of Local 2474 have been in negotiations with the hospital since November of last year.

The March 17 picket took place in front of the hospital’s brand new $225 million clinic and coincided with its first open house, an event aimed at bringing new patients to the re-branded Hennepin Healthcare System.

The hospital, which shelled out $1 million for a new logo, claims it cannot afford to offer workers a fair wage increase, protect workers from violence on the job, or safely staff buildings.

In the words of Local 977 President Carmen Brown, “The hospital built this glamorous building off the backs of workers and they are offering 1% wage increase in first year and 0% for second year of the contract. They are forcing workers to come to HCMC for their [health] care while telling us we are not worth a fair day’s pay for our hard work. We are also short-staffed and have issues of safety from patients assaulting frontline staff. Dr. Jon Pryor receives $835,000 a year and that’s without his 16% bonus.” Dr. Jon Pryor is the Hennepin County Medical Center CEO.

Calling out management’s lies, workers chanted, “You built this building off our backs, we demand a fair contract.”

When word got out the Pryor was in the building, workers lined up along the sidewalk chanting: “Who’s a liar? Jon Pryor!” Other workers held signs that stated: “742 incidents of workplace violence. 359 assaults.”

This is not the first time HCMC workers have engaged in militant struggle or that management has claimed it has no money.

Last year the hospital initiated a round of 131 layoffs that ignored seniority language, targeted union activists, women, workers of color and long-term workers. The layoffs sent veteran workers home while retaining temp workers, in violation of the contract.

President Carmen Brown, an African American woman, was one of the individuals laid off. One of her stewards, Marlon Gaston, also African American, was targeted for union activity and placed on administrative leave.

Both Brown and Gaston were reinstated after large scale organizing efforts and legal charges of anti-discrimination and unfair labor practices were settled in court.

As with the layoff battle, HCMC workers vow to continue their fight for a decent contract. As the chant goes, “No justice, no peace.” These workers mean it.