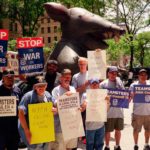 New York, NY – Teamsters Local 814 has reached an agreement with Waldner’s Furniture Environments to resolve the eight-week-old dispute over the company abrogating its contract and locking out its union workers.

Under the deal, announced Aug. 29, the Farmingdale-based office-furniture company will hire only delivery companies that pay union-level wages and benefits—“basically Teamster companies,” says Local 814 President Jason Ide. It will ensure that those companies offer jobs to both the 20 locked-out full-time workers and the part-time workers, and it will give its former workers up to 30 weeks in severance pay.

“It was ratified unanimously and the guys are thrilled,” Ide told LaborPress about two hours after the vote.
Some of the full-time workers have already taken jobs with other Local 814 trucking companies, enabling them to keep the same pension and health benefits package they had at Waldner’s, the union said. Some are going to retire, Ide added, and the part-timers are happy because they will still have jobs with union wages.

In exchange, Local 814 withdrew the unfair-labor-practice charges it had filed with the National Labor Relations Board. The board had notified Waldner’s that it was preparing to issue an official complaint against it. That “would have brought Waldner’s back to the table,” Ide says, “but not necessarily back into the trucking business.”

Support from the company’s customers, other unions, and Teamsters members was crucial to winning a satisfactory result, he adds. The New York City Economic Development Corporation suspended buying from Waldner’s July 19 while it investigated the labor dispute. The region’s two largest health care workers’ unions, the New York State Nurses Association and Local 1199SEIU, joined in demanding that NewYork-Presbyterian Hospital, the company’s biggest customer, join the boycott, and other Teamsters locals also backed the Waldner’s workers, despite it being a relatively small shop.

“Solidarity in New York is a real thing,” Ide says.

“This isn’t just a win for Waldner’s workers, it’s a win for all of us,” said George Miranda, president of Teamsters Joint Council 16, in a statement released by the union after the ratification. “Many companies are emboldened since the election to try to take more and more from their workers. But this is also an age of resistance, and workers are showing who really has the power when we get organized.”

“We fought for what was right, and we won a fair settlement,” added Local 814 shop steward Kevin Roach, who worked at Waldner’s for 33 years. “When workers fight back and have the community behind us, we can get what we deserve. Thank you to all of the unions, elected officials, and Waldner’s customers who stood with us. In the end, with your help, Waldner’s did the right thing.”

PrevAmerican Offers More Pay Than Delta; Union Skeptical
Spirit of the Law: How to Limit Corporate Greed’s Impact on WorkersNext
New York, NY - Teamsters Local 814 has reached an agreement with Waldner’s Furniture Environments to resolve the eight-week-old dispute over the company abrogating its contract and locking out its union workers.