Workers rights advocates may not be able to keep Wal-Mart from building more than a dozen retail stores in New York City – but they promise a long fight with Wal-Mart if and when the low-price retailer arrives.

“This is not a battle. This is a long-term war,” said Bruce Both, president of Local 1500 of the United Food and Commercial Workers (UFCW) at a rally held before City Council hearings February 3.

Wal-Mart is now planning to open stores at 16 sites throughout New York City, according to sources familiar with the retailer’s plans. Wal-Mart executives have refused to confirm or deny that num 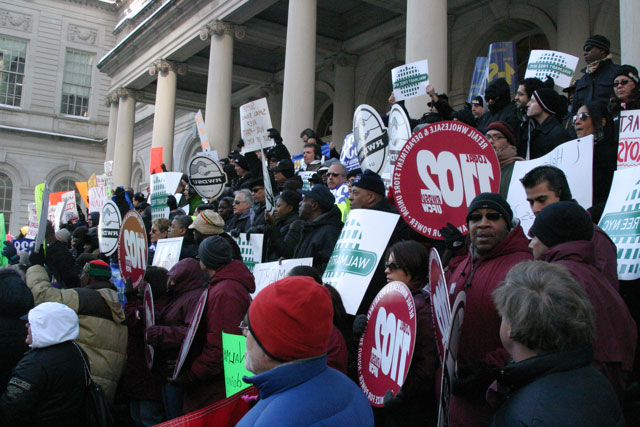 ber, saying they are still “considering opportunities.” However, Wal-Mart has also begun an advertising campaign targeting the whole New York City market – a much larger plan that would be justified by the single planned store announced for the Gateway Mall development on the Shore Parkway in Brooklyn. All 16 stores would be built on sites already zoned for large retail developments. Since the city has already decided to allow large retail development at the Gateway Mall, for example, it may be too late for officials to dictate which retailer takes these sites. However, advocates plan to fight the Gateway Mall development in other ways. For example, the project will need 22 acres of state-owned land that has not yet been given to the developers.

If Wal-Mart manages to open stores within City limits, the density of unionized workers here will make it convenient for workers rights advocates to constantly challenge Wal-Mart’s record of labor violations and poverty-level wages, according to representative from unions including the Retail, Wholesale & Department Store Union and the UFCW.

a class action suit by 1.6 million women against Wal-Mart for workplace discrimination now before the Supreme Court. In recent years, Wal-Mart has also paid millions to settle class action suits in Missouri and Colorado for alleged violations like illegally denying overtime pay and forcing employees to work off the clock. Wal-Mart faced similar suits in Pennsylvania, Oregon, and Minnesota.

Low-paid Wal-Mart workers are also disproportionately likely to need to use poverty programs such as Food Stamps, according to a 2004 study from the UC Berkeley Institute of Industrial Relations.

“Workers are in for the struggle of a lifetime,” said Jack Ahern, president of the New York City Central Labor Council. He called for an independent commission to make sure Wal-Mart complies with New York City labor laws.