August 9, 2011—At ground zero work goes forward on the New World Trade Center site. Right next to the construction of One World Trade Center is Verizon’s corporate headquarters where approximately 1,500 Communications Workers of America 1101 members were picketing in response to the failed negotiations between the union and Verizon.

According to Bob Masters, CWA’s Legislative and Political Director for District 1, unlike the last time union members went on strike against Verizon—for two weeks in 2000—the current strike is in response to the “unprecedented attack on workers’ wages and benefits.” He noted alarmingly, “I haven’t seen company demands like this before.”

The company claims that “new economic realities” dictate that workers must give back or give up what they’ve enjoyed for many years, i.e., a living wage, pension and affordable health care. But Verizon earned “more than $19 billion in profits and compensated their top five executives more than a quarter of a billion dollars,” according to a CWA website.

The anger near ground zero was very palpable. As scabs went in and out of the corporate building, the haughtier of them smiling, members chanted, “CWA, CWA” and some members shouted invectives. 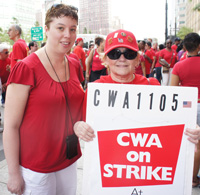 Numerous members expressed their outrage that the company, making handsome profits, is insisting that it is losing business in its traditional land-line business and that workers must align to “new economic realities.”

They both noted that the company’s wireless network is supported by the landline network. “The FiOS network is the backbone for wireless transmissions. Without that backbone, wireless service is nonexistent.”

Linda Halsey, a CWA 1101 shop steward said, “Verizon wants us to pay $1,300 per year towards medical coverage, but Seidenberg [Verizon’s former CEO] made over $100 million over five years!” Masters mentioned that Verizon management used New York’s state workers accepting wage freezes and changes to their healthcare system with Gov. Cuomo’s administration as an example to agree to concessions, but Masters quickly retorted that unlike Verizon, New York State doesn’t have a $20 billion surplus.

Some members said their gut feeling was that the strike “could be long and get nasty.” A union delegate for CWA 1101 said he’s worried because for the first time the company has deployed field managers brought in from other parts of the country to do the work normally done by union members.

The delegate said that he and his fellow members have talked with different buildings where union members work and asked them to refuse assistance requested by the field managers. He noted also he’d like to provide subway fee cards to fellow brothers and sisters to learn where the field managers are going to work, thereby keeping the union informed of the managers’ daily routine.