Living Wage NYC, a coalition of labor unions, clergy and community groups, have been fighting a tough campaign to ensure that workers working on development projects receiving government subsidies earn a living wage of $10 or more per hour. But not all unions favor the legislation, ironically, because some feel the legislation will discourage companies from building in New York, thereby potentially eliminating employment opportunities for their members.

In November, the City Council held a hearing on the legislation where both opponents and proponents of the legislation (The Fair Wages for New Yorkers Act) presented their facts. Christine Quinn has not yet allowed the bill to come to the floor for a vote, claiming that the November hearing was an opportunity to hear both sides. 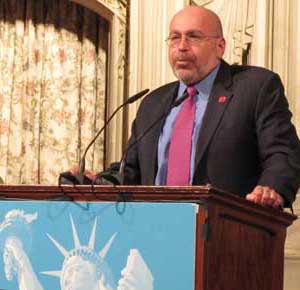 The premise of the bill is that large-scale builders and developers, when they receive substantial taxpayer subsidies for development projects, should be mandated to pay their workers at least $10 an hour. Seems fair enough. But Council Member Charles Barron said at the November hearing that the bill should be renamed “The Minimum Wage Bill” because $10 an hour doesn’t afford a lot of necessary items like food, rent and clothing in New York.

Jack Kittle, Political Director for DC 9, which represents painters and other tradesmen, said that the bill is not about workers because the bill excludes workers working for not-for-profits, in affordable housing (two industries, Kittle noted, that notoriously pay workers low wages) and small businesses.

“In the affordable housing industry, about two-thirds of the workers are paid off the books. In addition, the industry itself is a low-road industry because it uses inferior materials and the engineering and architectural staff doesn’t match the skills found in traditional residential and commercial development,” said Kittle.

Kittle emphasized he is not against workers earning a living wage. If it were up to him, he’d want his members to earn $1,000 an hour. But he is upset that rather than organizing workers to fight and negotiate wages with employers, the bill is legislating “an artificial wage” that could potentially persuade developers and companies to build and do business elsewhere.

“We have to live with the market forces that determine whether development happens here or in New Jersey or Malaysia because developers have no loyalty. The question is not whether workers deserve the money, but what the market can bear.”

Kittle believes that the living wage places another obstruction to developers wanting to build in the city because they already have to go through the Uniform Land Use Review Procedure before they gain city approval for rezoning.

He’s also upset by the bill’s current formulation because, “If retail workers deserve the money, why don’t workers in small business, not-for-profits and affordable housing deserve the money?”

Dan Morris, Director of Communications for the Retail, Wholesale and Department Store Union, and a spokesman for the Living Wage NYC Coalition, said despite the opposition of “two or three marginal building trade unions,” the living wage campaign enjoys a solid labor block of support from many of the most powerful and influential unions and pro-labor organizations in New York, including the UFT, SEIU1199, HTC, as well as the Working Families Party, civil rights groups, and clergy.

“This is seen as a very important fight for economic justice. Since Bloomberg has been in office, income and economic inequality has risen to alarming levels. This legislation represents an effort to reverse that trend and deliver real reform for workers tired of trying to survive on poverty-wages.”

In response to Kittle’s claim that the bill is really not about advancing workers’ economic interests, Morris noted that bill’s focus has always been about influencing job quality and standards among some of the largest developers and companies, which impact how the market and major industries function.

“It was important for us to make certain exemptions because not-for-profits and small businesses are often in much weaker positions in the market compared to the largest developers and companies,” said Morris.

Morris believes that it’s disingenuous for some of the building trade unions to make the argument that the bill isn’t about workers. “The developers who have spent millions campaigning against the bill would love nothing more than to build large projects non-union, so entering into alliances with those developers actually undermines the economic interests of the building trades. It’s not smart at all.”

Morris stressed that at the end of the day, it is taxpayers’ money at stake. He explained that previously billions of public dollars were spent in the name of job creation, with no questions asked, leading to a race to the bottom.

“We need to raise the standards and expectations for the jobs created with our money. For too long, many workers, particularly women and people of color, have been told to settle for the lowest wage jobs, which is unacceptable. We need reform now,” Morris said.

Morris also believes that the argument that an artificial wage would drive businesses away from the city is hogwash. He cited a University of California, Berkeley report (“Do Businesses Flee Citywide Minimum Wages”) that shows that San Francisco and Santa Fe, where the minimum wages are the highest in the country, are home to long list of national retail chains that do business there.

In fact, Jeff Fleming, President and CEO of The Amazing Hospitality Group in Portland, Oregon, testified at the November City Council hearing that, although it costs more, higher wages offers his company a variety of important advantages. “Running a facility with a higher-paid staff results in significantly lower staff turn-over, which reduces our recruitment and training costs.”

But Ashley Flower, a spokeswoman for Rite Aid, one of the retailers cited in the UC, Berkeley 2006 report, said that Rite Aid has since exited the San Francisco market “due to a variety of factors that contributed to the business decision to exit the market.”

Another irony in the ongoing living wage battle is that the city already has a living wage law that covers a variety of workers. According to the city’s Independent Budget Office, the 1996 legislation required that private firms contracting with the city to provide food services, security guards, cleaners and temporary office workers pay their employees a living wage that ranged at the time from about $7.25 to $12 an hour.

With an almost 16-year old living wage law, one may ask today, “What then is all the hubbub?”