Unions Participate in May Day Rally

NEW YORK, NY –  On May 1st, a coalition of labor and immigrant groups spoke out in support of stroger 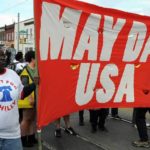 “The Trump Administration’s cruel threats against immigrants and workers are not irreversible. We’ve seen groups of workers – service workers in airports, teachers in various states, flight attendants – join together in unions and win better wages and working conditions. With courage and determination, unions and other community organizations can work to do right by our immigrant brothers and sisters, and all workers,” said Héctor Figueroa, President of 32BJ SEIU.

“The abuses that sparked the first May Day are still alive today. Unions are still fighting for every worker to have a fair day’s pay for a fair day’s work. Too many workers — especially immigrant workers — are patching together part-time jobs, working grueling hours at Amazon warehouses, fast food restaurants, or app companies. The labor and immigrant rights movements are coming together today to stand up for all workers and fight back,” said George Miranda, President, Teamsters Joint Council 16.

The day of action began with a press conference that included U.S. Representative Grace Meng, Lieutenant Governor Kathy Hochul, and Public Advocate Letitia James. The day concluded with a massive rally in Washington Square Park, in solidarity with May Day celebrations across the state and the country.

“For generations, our unions and immigrant workers have made countless contributions to our city and country,” said Public Advocate Letitia James. “As we experience threats from the federal government, it is more important than ever that we stand with our union and immigrant  brothers and sisters who continue to be living testaments to what this already-great country should be about — fairness, diversity, and unity.”

Background: The international workers’ holiday, known as May Day, began in the United States in the 1870s with a demand to shorten the working day to eight hours. One national labor organization called for a nationwide general strike on May 1st, 1886, which brought out hundreds of thousands of strikers across the country. Today it continues to be a day of celebration and mobilization around the world.