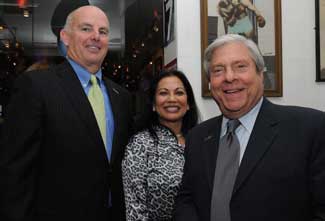 A star Hollywood director, a leader in healthcare and silent auction came together at Mickey Mantle’s Restaurant November 16 to raise money for a good cause.

About a hundred New Yorkers paid $200 apiece to attend the 22nd Anniversary Mickey Mantle’s Community Service Award and Sports and Entertainment Fantasy Auction for Camp Brooklyn. Last year, 400 kids from low-income families in Brooklyn got to spend two weeks at an accredited sleep-away camp, thanks to Camp Brooklyn, a 503(c)(3) nonprofit organization founded in 2002 by Brooklyn Borough President Marty Markowitz.

Disk jockey Ken Dashow, of radio station Q-104.3 FM, ran a live auction including vacations to New Orleans, Palm Beach Gardens and St. Thomas in the U.S. Virgin Islands. A silent auction followed for even more goodies, from a Las Vegas vacation to tickets to see the New York Knicks. All told, the evening raised tens of thousands for Camp Brooklyn. Since it just takes $500 to send a child to camp for two-weeks, the evening adds up to good news for dozens of Brooklyn children.

“If each of us does a small amount, it all works,” said Markowitz. “I wish I had enough money to send every kid to camp.”