Unions come through for Puerto Rico 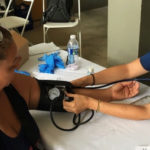 least 49 are dead. But Hurricane Maria was powerless to break the spirit of the Puerto Rican people, and it strengthened the resolve of 300 union members who mounted a two-week relief effort on the ravaged island in October. “It’s apocalyptic, third-world living now,” said Llamara Padro-Milano, one of 30 AFT health care professionals in the group.

“I have been going there all my life,” said the nurse, who grew up with one foot in New York and the other in Puerto Rico. “I cried because I could not believe what my island looked like. Seeing 300-year-old trees toppled in San Juan changed my reality. It broke my heart.”

Bita Mehrjou, a registered nurse at NYU Langone Medical Center in Brooklyn and a Federation of Nurses/UFT member, said “the entire island is affected. And in the places where the eye of the storm hit, there’s complete devastation.”

But the worst circumstances can bring out the best in people. “My union brothers and sisters came together for a common goal in the most incredible display of solidarity I have ever seen as a union member,” said Padro-Milano, who works at SUNY Health Science Center in Syracuse. “It was truly inspiring.”

And thanks to the strength of the island’s people, hope rises daily from the rubble. “They are hungry, they are thirsty, they have nothing,” said Padro-Milano. But “not once did I hear anger or complaining. What I saw was resiliency and true gratitude from the heart” that they and their families were alive.

Nurse Misty Richards, of the Oregon Federation of Nurses and Health Professionals, said, “We got here about three weeks after the hurricane and were the first faces many of the people had seen. How traumatizing is that?”

In August, 40,000 teachers in Puerto Rico voted to affiliate with the AFT. Evelyn DeJesus, a vice president of both the UFT and the AFT, said they couldn’t have picked a better time: “They are now our brothers and sisters.”

And their extended union family — the 300 members mobilized by the AFL-CIO, the Transport Workers Union and the AFT — backed those words with actions.

“As a union leader and as a Puerto Rican, I could not be any prouder that UFT President Michael Mulgrew and AFT President Randi Weingarten were the first in line to champion the disaster relief effort,” DeJesus said.

Unions, said Richards, don’t typically do disaster relief. “This is not their skill set,” she said. “But we showed what we can do when we work together. People put their egos aside and led with their hearts.”

The AFT donated 3,000 pounds of supplies. The nurses donated their time, working up to 16 hours a day. One left behind a pallet of diapers and baby formula, while another gave tens of thousands of dollars she raised on a Go Fund Me page.

The last group to leave identified where the critical needs are for a team that’s creating a permanent medical mission. Neonatal nurses tended to the elderly, ER nurses practiced community health, and when there wasn’t nursing work, nurses helped with roofing, chopping down trees, clearing roadways and boarding up windows.

While the nurses stepped out of their comfort zones, they weren’t alone. Teamster members accustomed to driving 18-wheelers or painting or doing electrical work served as their chauffeurs, driving minivans into remote areas. They’d drive as far as possible, and then the health care teams would hike up hills and along dirt roads.

“You had to cover yourself in DEET,” said Padro-Milano, “wear a long-sleeved shirt, socks that covered your ankles and long pants in 93 degree heat with 76 percent humidity.”
Mehrjou said the experience was mentally and physically exhausting, but nothing could stifle her pride.

“The solidarity helped a lot of us get through our day,” she said.
Richards said the unions put their faith in every single one of the 300 workers they sent to the island.

“They gambled on us to act right, to behave right, to be fluid and flexible and to rise to the occasion,” said Richards. “I believe we undelivered”.