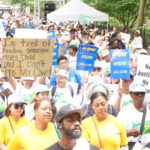 story DC1707 athletes, but “Everyday Heroes” as a procession of embattled early childhood educators and other staff marched up Broadway demanding wage parity with their counterparts working for the Department of Education.

They concluded their march outside of City Hall not with the traditional fanfare of ticker tape thrown from windows but to an outsized stage with music blaring and the roars of members anxiously waiting to hear uplifting speeches of support long overdue.  They were not expecting keys to the city but increased wages based on their training, education and dedication to children and their parents.

The long convoy of unionized childcare workers of District Council 1707 AFSCME took to the street demanding that the City of New York recognize their skills and dedication.  They are public center-based public day care and Head Start employees claiming discrimination because state and city regulations call for them to have the same qualifications as Department of Education employees but over time earn much less.

In some cases, a center Group Teacher after years on the job can earn more than $40,000 less than public school teachers.  Even center directors all with advanced degrees complain that in some cases early education teachers under their supervision can earn more than a director given the multiple wage-tier system maintained by the current city administration.

Supported by an impressive assembly of elected officials, union leadership and child care advocates, workers cheered and displayed confidence that their message was heard at City Hall.  Scott Stringer, the NYC Comptroller, Vincent Alvarez, President of the New York City Central Labor Council and Mark Cannizzaro, President of the Council of Supervisors and Administrators, the union that represents center directors and assistant directors, all spoke passionately that it was wrong that the City was continuing to pay center-based child care professionals and staff much less than public school employees.

They were joined by leading City Councilmembers including Stephan Levin, Chair of the General Welfare Committee, Mark Treyger, Chair of the Education Committee and Ben Kallos, head of the Council’s progressive Caucus.

District Council Executive Director Kim Medina said, “Forty years ago, you were called baby sitters.  They insulted you and they never paid you what you were worth.  Today you are honored as early childhood professionals but you are not paid the wages you need to live in New York City.”

She read a statement from the Rev. Dr. Martin Luther King, Jr. spoken to the Memphis sanitation workers 50 years ago on April 3, the night before he was assassinated, “But let me say to you tonight that whenever you are engaged in work that serves humanity and is for the building of humanity, it has dignity and it has worth.”

Medina said she looked forward to speak to the Mayor regarding wage parity as momentum builds but she added that her members were impatient and were demanding a resolution sooner than later.