‘Whose Work? Our Work!’ More Than 1,000 Jeer Broken Shop At Hudson Yds 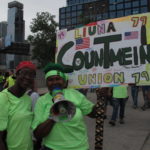 around Hudson Yards June 27, in another protest against developer The Related Companies’ decision to use nonunion labor on the project’s second phase.

“Open shop, we know what that means,” Joe Marinaro, 26, a Carpenters Local 20 member from Staten Island, told LaborPress: It means paying workers $20 an hour with no benefits. “The profit margin for the developer’s astronomical when they do that.”

Pensions are “incredibly important,” he added, and earning union wages enabled him to buy a house when he was 24. “I want everybody else to have the same opportunity,” he said.

Open shop, we know what that means,” Joe Marinaro, 26, a Carpenters Local 20 member from Staten Island, told LaborPress: It means paying workers $20 an hour with no benefits. “The profit margin for the developer’s astronomical when they do that.

“We are fighting for the right to get people in the union. The multimillion-dollar company does not want to pay benefits,” said Laborers Local 79 member Silkey Williams of Brooklyn, carrying a hand-lettered “LIUNA 79—Count Me In” sign. “If we don’t do it, nobody does it.”

“This is going to be a long hot summer for Related,” Gary LaBarbera, president the Building and Construction Trades Council of Greater New York, told the crowd.

So far, however, the unions have not taken any direct action against Related’s open shop, but that may change. “There is going to be a day when we shut this down,” Bernard Callegari of Local 79, wearing a teal Miami Dolphins T-shirt with “CountMeIn” on the back, told the crowd. “Not today, but they know it will come.”

“They’re after all of us,” he said later, referring to the Supreme Court’s Janus decision outlawing “fair-share fees” for public-sector unions, handed down a few hours earlier.

The rally came the day after building-trades workers held another rally in Columbus Circle to protest the Hudson Yards development’s lack of a firehouse, despite it containing 4,000 apartments, a hotel, a public school, and millions of square feet of office space.

“Hudson Yards is going to add the equivalent of a small city to New York’s West Side and we want to make sure that a new firehouse in the neighborhood will be a part of the plan,” Uniformed Firefighters Association President Gerard Fitzgerald said in a statement. “Our West Side houses are already being stretched very thin, and specifically in this neighborhood, with Penn Station and Madison Square Garden, firefighters must account for the time it takes to actually get to the scene. The safety of all residents should be a top priority for all parties involved, and we believe anything short of a new firehouse will not be sufficient to ensure everyone’s safety.”

LaBarbera charged that Related had built a “$200 million lawn ornament”—a copper-colored maze of interwoven staircases on the project’s 11th Avenue side—but “they didn’t think about putting in a firehouse to protect public safety.”

“I like the sculpture,” Tile, Marble, and Terrazzo Local 7 member Andi Kavaja, who’s working on the union-built side of Hudson Yards, said after the rally, across the street from the staircases. “My daughter will be proud that her daddy helped build this project.”

What he has a problem with, he says, is that he fears Related “wants to make the city like Dubai,” with cheap labor hired by a man with a bullhorn.

“They don’t care what kind of hands did the work,” he said, in a voice accented with his native Albanian. “These are the best mechanics, the best specialists, and that needs to be respected.”

“Trying to lower the wages of union workers when all the prices are going up—this is a shame,” he continued. “You want to make money, let us make money.”