As of November 2010, 73 SEIU 32BJ members have been locked out of work at the sprawling Flatbush Gardens building complex by their employer, David Bistricer of Renaissance Equity Holdings. He reportedly told elected officials that the union was giving up the fight and that the lockout would soon end.

Hector Figueroa, secretary-treasurer for 32BJ, said the rally was called to show Mr. Bistricer that the fight to end the lockout was far from over. In addition to the turnout by 32BJ members, the rally was a demonstration of union solidarity as members and leaders from other unions joined to show their support for the locked out workers. Bob Masters, Legislative and Political Director for the Communication Workers of America (CWA), which recently struck against Verizon because of the company’s shocking demands, said to the rallying members, “We know what you’ve been going through.” 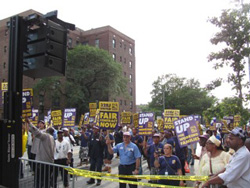 The rally also featured an impressive lineup of city politicians, including two city council members, Jumaane Williams (District 45) and Latitia James (District 35), who each implored the union members not to give up on the struggle to resolve the lockout.

It’s been a long ten months for the union. The struggle started in April 2010 when the labor contract ended and Renaissance told the union it wanted 30 percent wage and health benefit cuts. Kwame Abasi Patterson, who works in 32BJ communications department, said before the lockout 32BJ members were earning about $20 per hour, but with the employer’s demand to cut wages to $12 per hour, on top of health care cuts, the union struck because the demands were not acceptable.

Joe Mitchell, a porter at Flatbush Gardens for the past seven years, is relying upon unemployment insurance and monies from the union’s strike fund to get by, but said it’s still very difficult to make ends meet. He told the assembled crowd that his daughter is now living with her grandparents in Puerto Rico until he can go back to work to provide for her. 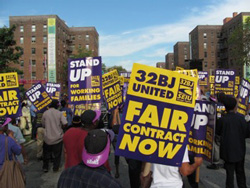 Some good news was announced to the rallying members, as the National Labor Relations Board in Washington, D.C., recently ruled that the lockout by Renaissance is illegal, placing Renaissance in a difficult spot as it may be liable to pay back wages and benefits, potentially worth millions of dollars. Also, Kevin Doyle, 32BJ’s executive vice president, reminded the assembled members that it wasn’t the first time that a private owner of Flatbush Gardens tried to get union members accept a reduce standard of living.

Instead of keeping the workers out, the past private owner went bankrupt, whereby Doyle turned towards Renaissance management’s office and bellowed, “You’re going to need a bankruptcy lawyer, not a labor lawyer,” referring to the hefty fines Renaissance may have to pay in back wages. Renaissance is obligated to hear the NLRB’s charge on Monday, November, 14.