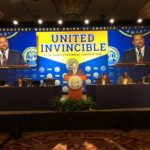 Transport Workers Union of America on September 27th, a post he has held since the resignation of former President Harry Lombardo earlier this year. The voting was part of the business of the 25th Constitutional Convention of the TWU, held in Las Vegas. In delegate voting by the representatives of TWU locals nationwide, Samuelsen, who served as President for three terms, since 2010, won by 364 votes over former Local 100 Car Equipment Department Division Chair Joe Campbell, who received 36 votes.

In a speech, Samuelsen said, “I pledge that I will work relentlessly to accomplish what needs to be accomplished for the TWU membership and our Locals. Delegates here in Local 100 know what I’m talking about. The work never ends…One thing I have learned in my years as a Trackworker [a formerly held position] with New York City Transit…is that, metaphorically speaking – you have to be able to punch a bully in the nose. If you don’t…the powers that be, whether those powers are sitting on the 20th Floor of 2 Broadway, or in City Hall, or in Albany, or in some corporate Ivory Tower in Dallas, you will get steamrolled.” He continued to outline “tremendous challenges ahead” which he detailed as, “we must protect what we have at all costs. Employers across our industries and our Locals are trying to marginalize or minimize our members’ jobs, through outsourcing, driverless vehicles, automated trains, corporate sponsorships; you name it, they’ll try it…we must continue to grow the union…we must continue to expand our influence politically, on all levels, locally, statewide, and nationally.”

Samuelsen also nominated Tony Utano for President of Local 100. Utano, who for the past seven years served as Vice President of Maintenance Way Division, has been an elected officer in Local 100 for nearly 35 years. On September 28th, the Local 100 Executive Board voted overwhelmingly to elect Utano after accepting Samuelsen’s resignation as President.

In his acceptance speech, Utano named the upcoming ballot question in November on whether to authorize a State Constitutional Convention as a major challenge. He called the possibility of a State Convention a “threat to our pensions, Workers Compensation, our children’s education and more.”

Samuelsen is currently working on a organizing drive with flight attendants at JetBlue airlines; the TWU has already organized Allegiant and Southwest airlines. He said the fight to organized greedy airlines is a major priority in the four-year term ahead of him.