Whereas the protestors leading and participating in the Occupy Wall Street (OWS) movement in NYC couldn’t get catch a sound bite from the major media in the early days, now all of a sudden are drawing media coverage and, consequently, moral and financial support from some of the city’s unions.

Maybe the major media didn’t cover it early on because they thought it would fizzle out like previous one-day marches. But two weeks later, TWU Local 100 members were walking from Church & Vesey Streets, just opposite the sprawling new WTC construction zone where International Union of Operating Engineers Local 14 and 15 members are operating and maintaining gigantic cranes, to join the encamped protestors at Zuccotti Park. 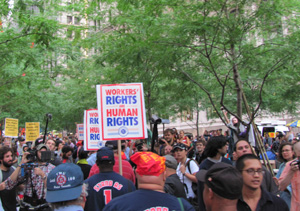 Horace Briggs, an organizer for TWU Local 100, said that the union was joining the protestors because their list of grievances is compatible with the union’s own, such as too much outsourcing, unacceptable cuts in healthcare and wages and exorbitant pay to executives.

The two-week old demonstration undoubtedly provides unions with an opportunity to counter the increasingly negative depiction and perception of unions. Briggs said, “We’re marching to show the public that TWU Local 100 stands with the ridership, whether they are union workers or not.”

But the demonstration, and the unions’ participation in it, also provides unions with the chance to more clearly define and express the economic demands emanating vaguely from Zuccotti Park.

Charles Jenkins, Local 100’s Director of Organizing, said, “Three years after Wall Street was bailed out, there still isn’t a bailout for working-class people. Ordinary people are hurting, but yet there is still resistance to pass Obama’s jobs act.” 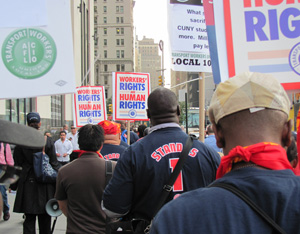 Local 100 members marched down Church Street, while trying to navigate around the thousands of tourists taking snapshots of the WTC construction. When they reached Zuccotti Park, police detectives immediately began to video the procession leading into the park.

The protestors immediately welcomed the Local 100 contingent. Jenkins, along with two other members, made it to the head of the throng where different protest leaders and celebrities have stood to shout messages that are then non-technically relayed by the multitude to the opposite ends of the park for all to hear.

Joe DiPaola, a bus mechanic in Manhattan, said he’s been to rallies before, but felt “a chill down his spin” as he stood at the head next to Jenkins and looked out to the inquisitive faces looking back at him.

Seven months ago, unions led the charge in Wisconsin to repeal legislative attacks on collective bargaining. When supporters joined the protests at the capital in Madison, their numbers quickly swelled to 70,000.

That high multitude has yet to appear at Wall Street and Zuccotti Park, but after the march, Jenkins indicated that other NYC unions may join with the TWU in supporting the OWS movement. As this story goes to Web, the Retail, Wholesale and Department Store union published a letter of solidarity with the movement, expressing that it “will do everything it can to learn from and assist Occupy Wall Street.”