“It’s time for a change,” said Steve Lawton, business agent for Communications Workers of America, Local 1102.
But by the morning after, the challenger had conceded victory to incumbent Republican Dan Donovan. Mike Ryan had endorsements from more than 40 unions and positive press coverage leading up to election, including an endorsement from this publication. But Dan Donovan had the advantage of being the incumbent, including endorsements and volunteers from a handful of unions including the powerful United Federation of Teachers, which made tens of thousands of calls to potential voters.

“In a race like this it’s all about getting out the vote,” said Rich McMahon, campaign manager for the Mike Ryan campaign and labor chair for the Staten Island Democratic Party.

Getting out the vote was especially important in an off-year election, with voter turnout of less than 10 percent on Staten Island — even though the New York Times called the Staten Island election “the Hottest Race in Town.” Many potential voters were not even aware of the election, according to volunteers like Steve Lawton.

Getting out the vote for Ryan
The Ryan campaign won endorsements from nearly 40 unions, from ironworkers to airline pilots, largely by promising to do a better job than the incumbent at prosecuting violations of workers rights. 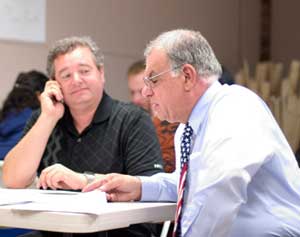 Organizers from several construction unions complain that incumbent Dan Donovan failed to prosecute alleged violations of prevailing rate laws. “He did nothing to help,” said Brian McBrearty, Business Manager for Sheet Metal Workers, Local 28. Transit workers also complain that Donovan failed to prosecute a single case of assault on a transit worker over the last four years, even though unsafe conditions from muggings to vandalism flourished on transit lines including the 78 bus line.

The Ryan campaign also reached out to other unions. “Ryan supported us during the Verizon strike,” said Local 1102’s Lawton.

Incumbent Advantage
However, district attorneys tend to hold onto their jobs in Staten Island. Democrat Bill Murphy held the job for more than 20 years in the 1980s and 1990s. Donovan has had since his election in 2003 to establish relationships with blocks of his constituents. Enough are not disappointed to provide more than a hundred volunteers on Election Day from labor unions that endorsed the incumbent, including the Detectives Endowment Association and several unions of firefighters.

“We’ll have an army of guys out there,” said Jack Kittle, political director for International Union of Painters and Allied Trades, District Council 9.

The United Federation of Teachers also endorsed Donovan, citing his work against bullying, domestic violence and childhood drug use. Donovan has also pledged not to accept plea bargains for suspects accused of assaulting public servants like teachers. In the weeks leading up to the election, volunteers from the UFT made more than 24,000 individual phone calls to get out of the vote for Donovan from the UFT headquarters in Manhattan, according to William Smith, spokesman for the Donovan campaign.

“In an off-year election, with nothing else on the ballot, you have to get the people who support you to come out and vote,” said Smith.