Poetland, Oregon – Andy Puzder was the CEO of the company that owns Hardee’s and Carl’s Jr. He 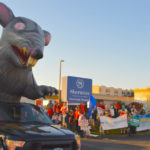 almost became President Trump’s Secretary of Labor. How far he’s fallen —since revelations of spousal abuse cost him both positions. On Sept. 28, Puzder was the featured speaker at a fundraiser for the Freedom Foundation, a group whose sole mission is to harass and drain the financial lifeblood out of unions. But to get to the fundraiser at the Portland Airport Sheraton, attendees had to pass by two large inflatable rats, one large inflatable “fat cat” and a crowd of noisy protesters from a dozen or more unions.
If most of the protesters looked like they worked for a living, it’s because they do. Led by Laborers Northwest Regional Manager Bob Abbott, construction laborers turned out in force in defense of public sector Laborers Local 483, which has come under direct attack from the Freedom Foundation.

In August, Local 483 members who maintain sewers and roads ratified a new contract with the City of Portland — one of the best they’ve negotiated in years, with raises of up to 10 percent on top of cost-of-living increases and a 2 percent longevity bump for senior employees. But a handful of Local 483 members at the city wastewater treatment plant, led by a one-time union bargaining team member, are unhappy with the contract, and want to stop paying union dues. It turns out there’s a process under

Oregon’s public employee collective bargaining law to do that: Gather signatures from 30 percent of represented workers, and you can trigger a special “deauthorization of a union security agreement” election. In plain English, it means you can vote on whether to turn financial support for the union into an individual choice instead of a group commitment. If they prevail,  the objectors could leave their coworkers to pick up the tab for union representation.

To help, they called the Freedom Foundation, which wants more than anything for union members to stop paying dues. In Oregon, the group has paid for ads and sent staff to union workplaces and residences to talk homecare workers and others into quitting their union. Last month, Freedom Foundation lawyers asked the City of Portland for the names of every Local 483 member in the unit. [Local 483 is fighting the request.]

Paid staff from the Freedom Foundation also showed up outside Portland Bureau of Transportation’s Kerby maintenance yard with the deauthorization petitions. There they were confronted by union loyalists, and reportedly given an angry sendoff.
It’s a shame that any union member would call an anti-union group for help, PBOT jet truck operator Amil Zell told the Labor Press.

“The way our union is organized, anybody that gets involved has influence in the decision making,” Zell said.