On Saturday April 9, 2011, thousands of workers from the public and private sector as well as the trades lined Seventh Avenue starting at 42nd Street. The massive crowd stretched for blocks. The message from the speakers was unified and consistent “We are one and respect our rights.”

Denis Hughes, President of the New York State AFL-CIO, stated, “Working men and woman across the country are under attack like never before. But as today’s rally has shown, these attacks have only served to energize working people. Today’s massive turnout is a testament to New York labor’s strength, solidarity and commitment to our shared sense of purpose.

For anyone who doubts our resolve, our message today is clear. We are one movement, and we demand that our rights be respected.”

Richard Iannuzzi, president of New York State United Teachers, was one of the first union leaders to address the crowd. "What we're facing is an attack on working conditions, whether it be overcrowded classrooms or overcrowded docks.

We hear this garbage about how it has to do with deficits, but it's an attack on collective bargaining, said Iannuzzi."

UFT President Michael Mulgrew prophesized that 20 years from now, teachers will be teaching how 1 percent of the country that already owned just about everything tried to steal more from the rest of the country, "but the workers rose up and stopped them."

"If you want to test our resolve, then you bring on that fight!" said Gary LaBarbera of the Building and Construction Trades Council of Greater New York. 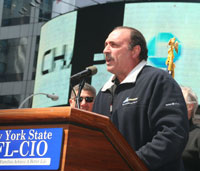 New York’s labor movement, said President Hughes, is rich in tradition when it comes to the unity and solidarity of its members. That’s why it comes as no surprise that brothers and sisters from all sectors of our movement stand together. “The labor movement will continue to speak with one voice on behalf of all working people,” continued Hughes.

The rally was held in response to unprecedented attacks on the rights of working men and woman to organize, to engage in collective bargaining and to hold safe those benefits won at the bargaining table over the past 50 years.