You wouldn’t know it from reading the newspapers, but there was a huge demonstration in New YorkCity on Wednesday June 16, 2010. About 20,000 municipal workers rallied along Broadway by City Hall Park to protest deep proposed budget cuts.

Mayor Michael Bloomberg’s proposed budget for next year calls for the loss of thousands of city worker jobs, including those of teachers, firefighters, sanitation workers, social workers, day care workers and others.

But even though protesters flooded the site and spilled into the surrounding streets chanting “Save Our City,” the rally was barely mentioned in the press, with nothing in the New York Times or The Daily News and just a tiny story buried on page eight of the New York Post with no photograph. 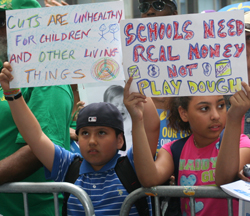 The demonstration included members of 100 city public-sector unions protesting proposed cuts to various services. Chanting “We are New York,” the crowd voiced their concerns and anger over the potential loss of thousands of staff positions. Those who attended the rally clearl 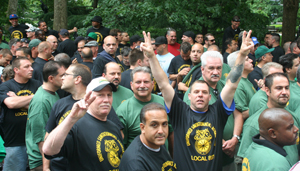 y expressed concern about the effects ofcutbacks to jobs and services.  “Who’s going to save this city?” asked UFT President Michael Mulgrew, leading a chant from the stage as he emceed the event. “We are!” came the response from the crowd. “Are we going to fight? Are we going to push back? Are we going to win?” he asked rhetorically. Loud cries of “Yes!” came thundering back from the spirited crowd that stretched all the way from City Hall Park down past Federal Plaza. Mulgrew introduced labor leaders and politicians who all promised to stand together and prevent the devastation these cuts would create.

Organized by the Municipal Labor Committee (MLC), which represents 100 municipal unions, the MLC called upon its members to rally to protect fire houses, libraries, senior centers, schools and day care centers. At the rally, Harry Nespoli, MLC Chairman and Uniformed Sanitationmen’s Association President, praised city workers for their dedication and commitment to the city. He asked that every New Yorker tell the mayor to stop the budget cuts. “You don’t cut services and you don’t lay off people when you have a surplus of three billion dollars,” said Denis Hughes, the President of the AFL-CIO.

When 9/11 happened, “New York police officers ran toward the Trade Towers, firefighters went into the building and sanitation workers backed us up with equipment,” Pat Lynch, president of the New York City police union, told the crowd. “New York needs every one of you. They say they don’t need us, I say they’re wrong. We have fewer police officers today then we did on Sept. 10, 2001  and that’s a recipe for disaster,” he added. Michael Palladino, President of the NYC Detectives Union, said the State needs to get a budget done and make sure that New York City gets its fair share. 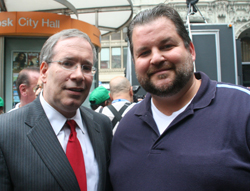 With state lawmakers threatening to cut as much as $500 million in city school aid, Mayor Bloomberg’s proposed budget for next year slashes more than $1 billion. The city would lose firehouses and senior centers, while libraries would have their hours and days chopped. Some 40 branches would close. After-school programs and tutoring for students would be lost, while class sizes would soar.

In response to the rally, the Bloomberg administration released a statement placing the blame squarely on Albany: “the City is facing a massive reduction in the amount of tax dollars the State returns to the City and the lingering impacts of the recession. Just like any household hit by tough times, the City has to continue to tighten its belt, and that means reducing the amount of taxpayer dollars we spend.”

At the rally, a History of UFT Political Action from the beginning to the present: