The Homecoming — MCNY Returns to the Bronx

Andre Sharizmian has a lot of qualifications. He can show you a page listing the dozens of courses he’s completed — everything from desktop publishing to business management. There’s just one problem standing between him and a good job: He completed all these courses while serving time in the New York State prison system for burglary and robbery.

Sharizmian hopes to take his life in a new direction. He’s enrolled in classes at the newly opened Bronx campus of the Metropolitan College of New York, studying social work. “I want to prevent today’s kids from making the same mistakes I made,” he said.

MCNY may be well suited to help Sharizmian realize his goals. Each semester, or “purpose,” at MCNY is linked to “construction actions” ranging from internships to full-time work experience. That means students like Sharizmian will graduate with more than another printout of his completed coursework. He’ll also have a real-world work history and up-to-date references. 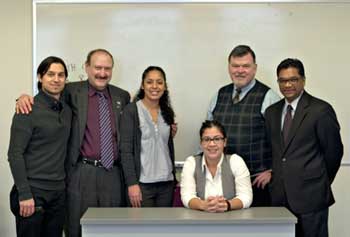 “All of our curriculum is connected to the outside world,” said Tilokie Depoo, director of business programs and professor of business. MCNY was founded in 1964 with a mission to help women enter the job market. The mission has spread to other groups of people who face hurdles to success, but the philosophy of “purpose centered education” remains the same. Most of MCNY’s students are now minorities. Many hold down fulltime jobs in fields from health care to business.

MCNY’s Bronx campus will make it easier for the college to serve students like Sharizmian, who lives nearby. MCNY is no stranger to the Bronx — it used to operate a campus at the same location on Courtlandt Avenue. But in 2005, MCNY closed its campuses in the Bronx, Staten Island and Queens. MCNY’s return to the Bronx shows its renewed commitment to the area.

MCNY spent about $500,000 to rehab the eight classrooms at the Bronx campus, including a new computer room. About 50 students are enrolled in classes this spring and by next year 200 students are expLP web article posting form