The Future of L.I. Bus Service Discussed at “People’s Hearing”

The Future of L.I. Bus Service Discussed at "People's Hearing"

They also urged the County to re-enter negotiations with the MTA. The ‘Hearing’, organized by the Tri-State Transportation Campaign, the New York Communities for Change, the Long Island Progressive Coalition, Long Island Jobs With Justice, Vision Long Island and the Hicksville Chamber of Commerce was held due to the lack of County sponsored hearings about the privatization of one of the largest suburban bus systems in the country.

County Executive Edward Mangano and Peter Schmitt, the Presiding Officer of the Nassau County Legislature, have ignored requests from the organizers to hold on the privatization of Long Island Bus. The County Executive and the Presiding Officer, as well as all County Legislators and County Comptroller George Maragos, were invited to attend the hearing to listen to rider concerns about the potential privatization. Neither County Executive Mangano nor Presiding Officer Schmitt was expected to attend the hearing. Legislators Judy Bosworth, Denise Ford, Judy Jacobs, Robert Troiano and Wayne Wink, as well as representatives from Comptroller Maragos’ attended the meeting.

“Nassau County has failed to be responsive to its citizens and residents,” said Kate Slevin, executive director of the Tri-State Transportation Campaign, a non-profit transportation policy watchdog in New York, New Jersey and Connecticut. “It’s time for Nassau County to commit to five years without fare hikes or service cuts regardless of who is running the system.”

The County announced in June that the privatization, scheduled to go into effect on January 1st of 2012, will be run by Paris based Veolia Transportation for five years. While the County and Veolia have said that service and fares will remain the same in 2012, no information about what that system will look like after 2012 is available, nor is any information available about how effectively Veolia will run the system. With the news of Jay Walder’s departure in October 2011, the groups urged the County to reenter negotiations with the MTA.

“LI Bus was taken over the by MTA in the early 1970s because the private sector failed to adequately provide efficient, affordable and effective mass transit,” said Ryan Lynch, senior planner and Long Island coordinator for the Tri-State Transportation Campaign. “County Executive Mangano should take advantage of Chairman Walder’s pending departure to restart negotiations with the MTA to find a funding solution that works for all parties involved.”

Veolia has a track record of raising fares and cutting service when it does not receive subsidies it needs to run a robust transit system. In Columbia, South Carolina, the lack of local resources led to fare increases of 100% and the elimination of the downtown trolley service and service cuts along other routes since Veolia took over operations for the Central Midlands Regional Transit Authority in 2002. 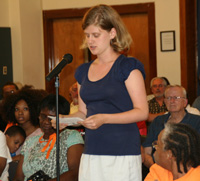 "We are very concerned with the potential loss of service for LI Bus as the system becomes privatized in 2012,” said Eric Alexander, executive director of Vision Long Island.  “Nassau County must remain a partner throughout this process, with the understanding that eliminating service works directly against the public interest.

“If the union representing the LI Bus employees had been allowed any input, they would have reminded the County of their obligations under Section 5333(b) formerly known as 13 (c) of the Federal Transit-Act which preserves the collective bargaining rights when federal funds are involved when there is a change of employer”, said John Durso, president of the Long Island Federation of Labor, AFL/CIO. “The public has no way of knowing whether Section 13 (c) was taken into consideration or whether Veolia intends to absorb a loss for the first year and then come back with fare increases, service cuts and an attack on the collective bargaining agreement in the years to follow.”