Teamsters and Allies Stand Together as Sotheby’s Auction Proceeds

A scuffle broke out when OWS protesters, posing as buyers, attempted to enter the building, but were quickly and harshly dragged along the street by the private security guards and ultimately arrested by NYPD. 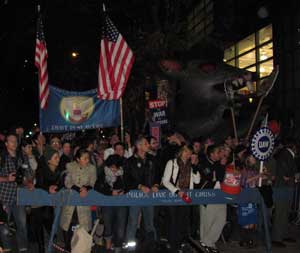 Tysh said that both sides met last week, but no progress was made because the company was not willing to revise its previous terms and demands. Jason Ide, Local 814’s President, said that the union was prepared to modify its proposals and compromise. According to Ide, the union at first did not want to participate in a company-sponsored 401k plan because in the middle of the previous contract the company abruptly cut its matching dollars.

“We were willing to drop the proposal to be in a separate plan and participate in the company plan so long as the company could guarantee that it would not cut its match again,” said Ide. Ide believes that the company-imposed lockout has to be about more than just increasing shareholder value and profits, especially as Sotheby’s was expected to exceed sales of $150 million of abstract art in one night. “It could be the company is simply taking advantage of the increased attacks on labor this past year,” said Ide.

This is not the first time Local 814 members have been locked out by Sotheby. In 2004, the company locked out the local for three weeks. Before the lockout, Local 814 members were responsible for packaging the art, installing the pieces in the galleries and transporting them to and from a warehouse. They earn on the low end $18 per hour to $25 and above.

Terence McAllister, who’s worked at Sotheby for the past 9 ½ years, said the big difference between the lockout in 2004 and now is that the “union has backup from other unions and OWS.” Another ally the Teamsters hope to gain is the artists who produced the work on display for sale. Tysh said the local has been communicating with some of the artists who may come out publicly in support of the locked-out workers.

While the OWS protests in Zuccotti Park continue near the heart of one of the world’s largest financial centers, last night’s encounter between art buyers exiting their Bentley’s and Mercedes and union members and allies behind police barricades showed starkly the dichotomy of the excesses of the 1 percent and dearth of the 99 percent.

Of note, Dan Abernethy, Press Officer for Sotheby’s, did not return calls for comment.