“It’s not that Spectrum doesn’t have the money to provide the basic dignity and the basic benefits — it’s that they are so greedy and so selfish they don’t want to give the basic respect to all of you,” Zephry told striking IBEW Local 3 workers assembled outside Charter/Spectrum’s East 23rd Street offices on Thursday. “This is part of an all-out war on unions. Let’s be clear: This isn’t just about this strike; this is about an effort to get rid of the rights of all of us.”

Teachout, who unsuccessfully challenged Andrew Cuomo for the governorship four years ago, called herself a “Teddy Roosevelt trustbuster” and promised, as attorney general, to use a 100-year-old measure called the Clayton Act originally enacted in 1914 to confront anti-competitive practices — to stymie corporate mergers like the massive $65 billion deal that allowed Charter Communications to gobble up Time-Warner in 2016.

“It’s not just the workers hurting — it’s the service,” the Fordham University law professor said. “If you want high quality service, you want union workers. Spectrum service is down the tubes.”

Members of IBEW Local 3, protesting cuts to employee medical and pension benefits, in addition to a slew of other attacks on worker gains, have been striking against Charter/Spectrum for more than 450 days.

“They came into the State of New York thinking they can do whatever they want to do,” striking foreman Rakim Smith said. “This is really where we need somebody to rein them in.”

They came into the State of New York thinking they can do whatever they want to do. This is really where we need somebody to rein them in. – striking foreman Rakim Smith

Teachout  further blasted Charter/ Spectrum for “treating people like widgets” and  “not like human beings who have real skills and real value.”

“It’s just commonsense that if you allow private companies to govern us, to become monopolies in the way that they control the political system, they’re going to do everything that they can to squeeze everyone. It’s bad for service, it’s bad for workers, its bad for democracy.”

“All of the unions, the police union, MTA…everybody because what we lose, they lose,” Landau said. “They chip away at us, they get something out of us and the next thing it’s going to be them. Greed is killing us all.”

“These companies used to come to the table — they used to negotiate,” Teachout said. “But what we’ve seen in these 453 days, is there’s no serious, honest negotiation. Spectrum just wants to strip the dignity from these men and women. And all they’re asking for, and they’re not asking a lot, they’re asking for basic benefits, basic dignity and what they had before. And Spectrum won’t even come to the table.”

The corporation insists that strikers who have crossed the picket line since the job action first started last year, are enjoying generous benefit packages and average wage increases of 22-percent. 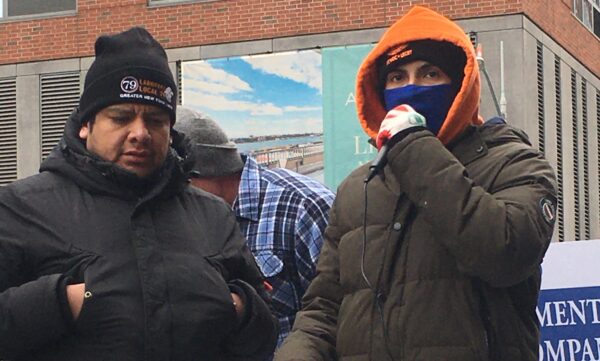