Federal Stimulus dollars are now putting union members to work on the Brooklyn Bridge, according to George Galis, general Secretary and Treasurer of the International Union of Painters and Allied Trades (IUPAT).

“The project is proof that federal, state, and local government can work together and create jobs,” said Galis.

Galis spoke at the foot of the Brooklyn Bridge in New York City just after sunrise September 23. He was joined by elected officials, union leaders, and dozens of construction workers preparing to start their shifts working on the Brooklyn Bridge rehabilitation project now underway.

For Galis, Brooklyn is just one stop in “It’s About Jobs,” an 18-day national bus tour that began in Seattle, Wash., September 8, and includes stops throughout the West and Midwest before finishing up in Wilmington, Del., September 24. Created by IUPAT, the bus tour makes the point that federal Stimulus dollars from the Federal Recovery Act of 2009 are turning into jobs for local construction workers. Those jobs may be threatened by the outcome of the Congressional mid-term election this November.

If the Stimulus funds are taken back, many construction projects are likely to be cancelled. “We have to do everything in our power to get the right people elected,” said Warren L. Mart, General Secretary and Treasurer of the New York State Council of Machinists. “It’s about our way of life.”

“This is an example of success,” says Gary LaBarbera, President of the Building and Construction Trades Council, referring to the Brooklyn Bridge overhead. Worker have begun to install the “dancefloor” under the Bridge in preparation for sandblasting old, leaded paint; preparing and repairing structure steel; and repainting. It will cost a total of $508 million to rehabilitate the Bridge. The Stimulus, also known as the federal Recovery Act of 2009, will pay $30 million of that total, which works out to 150 construction jobs, according to the White House. More than 70 painters are already at work on the Bridge according to union officials. 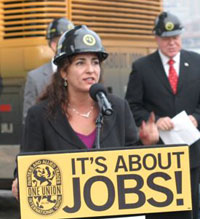 However, the Republican leadership in Congress promise to “Act immediately to reduce spending by canceling unspent stimulus funds,” according to their “Pledge to America,” released September 22. Almost all of that unspent money is now slated to go to infrastructure projects, like fixing up the Brooklyn Bridge.

“That money puts a lot of our guys to work,” said Jack Ahern, President of the New York City Central Labor Council.