Spectrum Avoids Caning During Cuomo’s State of The State Address 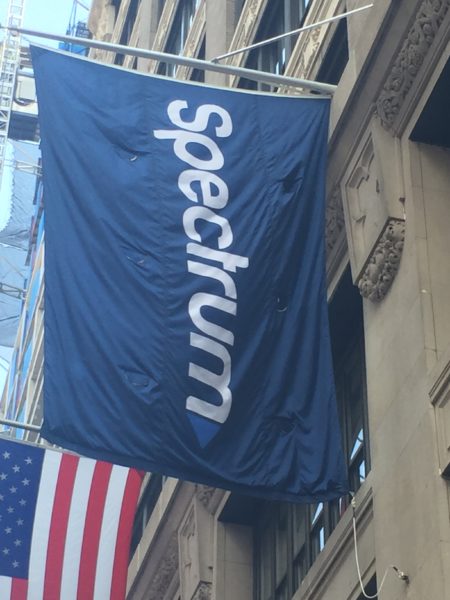 the state’s top executive might take Charter/Spectrum to task during his 2018 State of the State address on Wednesday.

Back in September, Cuomo stood with striking IBEW Local 3 workers inside Brooklyn’s Cadman Plaza Park and blasted the telecom giant for failing live up to its franchise agreement with New York State, as well as its unwillingness to settle a fair contract with 1,800 striking employees.

“If they don’t get their act together and fulfill that agreement,” the governor said, “they’re going to be out of the State of New York.”

Governor Cuomo also said at the time, that the state was going to “demand respect for the skills and experience of the workforce.”

“And we are going to demand fairness,” the governor said in a statement. “Fairness for the worker’s contribution to the company. Fairness to the fact that without you, [Charter/Spectrum] CEO [Tom Rutledge] doesn’t make $98 million this year. And fairness in wages because the working men and women deserve their piece of the American pie.”

28. Charter/Spectrum reportedly dismissed the union’s latest offer to end the punishing job action shortly before Christmas, and there appears to be no end to the strike in sight.

On Tuesday, one day prior to the governor’s State of the State address, former gubernatorial challenger Zephyr Teachout Tweeted, “Imagine if Governor Cuomo used the State of the State to lash out against Charter/Spectrum and how they hurt New York workers, and used his platform to stand for strong union rights and basic human dignity at work.”

Governor Cuomo broadly lauded organized labor in this week’s State of the State address, saying, “We believe labor unions have built the middle class” and that New York stands “shoulder-to shoulder with our union brothers and sisters.”

After almost 10 months on strike, acrimony appears to be on the rise with striking IBEW 3 workers blaming Charter/Spectrum and its roster of replacement workers — or scabs, as some would call them — for service interruptions and slow downs.

Charter/Spectrum spokesperson John Bonomo, however, disputed any reported service interruptions or slow downs as a result of the ongoing strike.

“The only major outages over the past several months occurred when our network was vandalized,” Bonomo told LaborPress in an email. “In each of those cases, repairs were completed within hours, restoring services to our customers.”

According to Charter/Spectrum, there have been more than 135 cases of vandalism since the strike began in March, compared to four cases in the prior three years.

“Overall, we continue to provide a quality level of service to our New York City customers,” Bonomo added.

Critics of the telecom giant sharply dispute that claim, while branding those Charter/Spectrum has hired to perform the jobs of striking workers, as unqualified and highly suspect.

Many have taken to Twitter to launch their displeasure.

But despite Governor Cuomo’s prior admonishment — and a $13 million fine levied against the corporation for failing to fulfill aspects of a signed agreement involving enhanced customer service — Charter/Spectrum maintains that it is in full compliance with its franchise obligations and mandates.

“As we told the NYC Council at its hearing late May, Charter is meeting its franchise obligations with regard to the use of

contractors,” Bonomo told LaborPress. “The contractors serving our customers during the strike are overwhelmingly from New York City. However, the franchise clearly allows the company to use contractors from elsewhere, which we are doing. While we will not elaborate on our contingency planning, the use of a stringent vetting process and use of quality contractors is paramount so that we may best serve our customers.”

It remains unclear how many of those so-called “contractors” actually reside in New York City and how many are, indeed, from elsewhere.

Editor’s Note: Charter/Spectrum was invited to talk about the ongoing strike on the next episode of LaborPress’ “Blue Collar Buzz” radio show/podcast. They declined.