NEW YORK, N.Y.—Now the death meter has clicked up to six. Abdul Saleh, 59, a Yemeni immigrant who 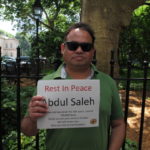 had driven a yellow cab for 31 years, was found dead June 15 in his apartment in southeast Brooklyn, after apparently hanging himself.
He was the sixth taxi-industry driver to commit suicide in the last seven months, driven by what New York Taxi Workers Alliance head Bhairavi Desai called “financial despair” at a protest outside City Hall June 18.

“Six men took their lives. Why isn’t there an uproar?” Rep. Adriano Espaillat (D-N.Y.) asked the few dozen people there. “I am appalled that the entire city is looking at this like it’s normal. This is a crisis.”

Saleh, who drove the night shift, had been “coming up short every week” on his weekly payments to lease a cab, NYTWA organizer Biju Mathew told LaborPress. Weekly leases typically cost about $700 to $800, he added. Saleh was usually $50 or $60 short, but several weeks ago, he was more than $250 in the hole, and, “after that week, he sort of gave up.”

His suicide came on the morning of Eid al-Fitr, the Muslim holiday celebrating the end of the daily fasting of Ramadan.

Drivers’ incomes have dropped in all sectors of the industry since the arrival of app-based services flooded the streets with cabs, Mathew says. Yellow-cab drivers now typically make less than $100 for a 12-hour shift—what they would have taken home on a good weeknight in the 1980s—even on Friday and Saturday nights, which once could provide half their weekly income.

“Drivers all want to work six days, but in this condition, everybody’s doing seven,” Mathew says. And Saleh was getting older, so his “capacity to grind on the streets” for 12 to 14 hours was beginning to decline.

Desai said she never thought she’d have to change the union’s answering-machine message to include a suicide-hotline number, but drivers whose incomes are falling can see “no alternative.” “Don’t you dare give up,” she urged them. “You have a movement behind you.”

The union’s demands include that the City Council enact a cap on the number of for-hire vehicles the city licenses. In 2011, before app-based services arrived, there were about 50,000 yellow, black, and livery cabs in the city, according to city Taxi and Limousine Commission figures. Today, there are 130,000 for-hire vehicles, about 70,000 affiliated with Uber.

NYTWA also wants the Taxi and Limousine Commission to set the fare for yellow and green cabs as the minimum for all for-hire vehicles, to prevent price wars that cut drivers’ income, and to set labor standards for the industry, such as a cap on how much cab companies can charge drivers for leases or vehicle financing. The TLC, Desai said, has a rulebook for drivers, for meter shops, and for back-seat televisions—but none for the companies that “dominate the industry.”

“All we need is basic regulation,” she added, “but we have no action.” The union plans to protest outside City Hall every day “until we win.”

Bigu Haider, originally from Bangladesh, compares the situation to the epidemic of suicides by farmers in India plagued by drought and debt. In 2015, more than 12,000 Indian farmers and agricultural workers killed themselves, according to data from India’s National Crime Records Bureau analyzed by the World Health Organization.

There are 180,000 drivers in the industry, he added. “If we are united, we can change everything.”