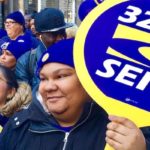 an historic raise for 40,000 airport workers. This pay increase to $19 for baggage handlers, security officers, wheelchair agents, airplane cleaners and other airport workers at JFK, LaGuardia and Newark airports is particularly significant since the new wage policy will provide an unprecedented $8.45 raise in New Jersey and parity pay with New York airport personnel. It will also result in real gains for the New York airport workers themselves, who have been making $13.00 an hour. Clearly this successful organizing campaign by SEIU 32BJ has lead to a historic victory for thousands of airport workers earning poverty wages. Since 2012, the 14,000 baggage handlers, skycaps, cleaners, security, wheelchair and passenger service workers at JFK, LaGuardia and Newark have been at the forefront in the

“We did this together, we fought for so long and we won!” said Gertrudes Lopez-Ortiz, a cabin cleaner at Newark Liberty International Airport. “Now it is a dream come true for me and my co-workers! I was here when the Port originally promised this in 2014. Our hard work, and the support of our brothers and sisters in 32BJ is paying off.”

In 2016, about half of the New York and New Jersey airport workers, who had won union recognition with 32BJ, negotiated their first contract, which now provides important workplace rights and protections including seniority rules, scheduling protocols, disciplinary procedures and health and safety guidelines. As the demand for a union was won, workers turned to the Port Authority to raise wages across the board and provide needed corrective action to the low-road airport subcontracting system that has rewarded competitive contractors who provide low bids using low wages and non-existent benefits. While 14,000 workers led the fight, the wage standards set by the Port will cover some 40,000 contracted airport workers at the three NYC-area airports, including workers in other sectors like food-service and retail.

“This is an unprecedented win for 40,000 contracted airport workers in an ongoing campaign led by thousands of cabin and terminal cleaners, wheelchair attendants, baggage handlers, security and other contracted service workers who have won $15 an hour and the union lifting families and communities in both New York and New Jersey. They are part of a national movement of workers across this nation that are rising to demand their fair share and turn low-wage contracted jobs into family-sustaining jobs. New York and New Jersey airport workers have led the way and shown that when we work together in unity, we can win,” said 32BJ President Héctor Figueroa.  “Airport workers are on the front lines of ensuring safety improving services at our airports. They greet passengers, clean the terminals and airplanes and load bags into planes.  In emergencies passengers often turn to these workers for help. That is why it is so important that we invest in them and in their training and retention. Providing family-sustaining wages will help keep more workers on the job longer and help them build their expertise to make our airports safer and run smoother. We want to thank Governor Cuomo for his steadfast support and actions over the years on behalf of airport workers and Governor Murphy for taking action early in his administration. The Authority board members should also be commended for listening to the workers’ concerns and for putting in place a sensible wage policy that will help make our airports safer and better. We look forward to continue this partnership and make these jobs and our airports even stronger.”