Ready for Takeoff: Community Stands Alongside IAMAW in Support of Delta Union Vote

Hundreds of New Yorkers gathered near JFK Airport on October 15 in solidarity with the men and women of the International Association of Machinists and Aerospace Workers. The event, co-organized by

the Central Labor Council of New York and the NYS-AFLCIO, kicked-off a 56-hour campaign supporting the IAMAW’s crucial organizing efforts at Delta Airlines, where an ongoing National Mediation Board election could secure collective bargaining rights for more than 30,000 employees. In addition to many of New York’s key labor leaders and public officials, Friday’s rally assembled scores of union members and community advocates who pledged their support to the Union during the vote, the first part of which closes on November 3.

In 2008, Northwest Airlines merged with Delta to create what is now the world’s largest commercial air carrier. The merger posed a critical challenge to a union that, like many along with it, grows more and more threatened by deregulation in the private sector. Today, over 11,000 former Northwest Employees, who have been represented by the IAMAW for over 50 years work alongside over 22,000 Delta employees, who do not share the benefits and protections of a union contract. On Friday, speakers like JFK employee Marta Sanchez made clear that, as the vote’s end draws near, a wholly unionized airline is the only way to ensure the “strength, safety, and future” of all the company’s employees, both “on the job and off the job.”

Queens’ Councilwoman Elizabeth Crowley and Assemblyman David Weprin were among the dozens of elected officials to pledge their support to the IAM’s efforts at Delta, and joined others Friday to speak on behalf of their constituents. It was stressed that the decent livelihoods secured by IAM employees directly translates to the strength and livelihoods of entire communities. A pro-union vote is a ‘no-brainer’ for those seeking opportunity to “improve a family, or improve a city,” Weprin said. 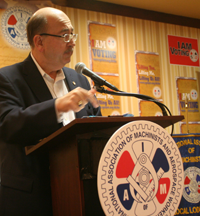 Beyond this, State Assemblyman and Workplace Safety Committee chair Rory Lancman attested to the danger posed by deregulation and anti-unionization in aviation, where inexperienced or untrained workforces can imperil customers and jeopardize airline security. “Well-trained, diligent, and devoted men and women” who make up the union are “vital to airport security and customer safety,” he said. “Without them… there would be no industry.” 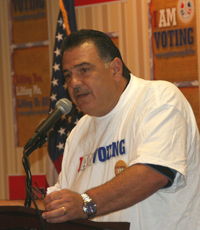 Congressman Anthony Weiner contextualized his colleague’s statements within an even wider perspective :  “A vote in favor of the union,” is a “vote for all of New York, and for all of working America.” Speaking to a standing ovation, Mr. Weiner urged Delta employees, who continue to face relentless intimidation by Delta management, to continue fighting– even in spite of the company’s well-financed anti-unionization campaign.  Weiner issued that the union vote at Delta, which is the largest in the history of the industry, is serving as a “canary in the coalmine” for antiunion forces. He reminded the audience that “other airlines will be watching the vote closely,” and that their ambitions to break unions could be thwarted with a successful union campaign at Delta.

At around noon, IAMAW’s International President Tom Buffenbarger walked with Vice President Robert Roach onto the stage, where they joined New York Central Labor Council President Jack Ahearn and IAMAW District 15 President James Conigliaro to participants’ standing ovation. Together, the representatives acknowledged the rally’s atendees and organizers, as well as the solidarity shown by other trade unions who were represented in the audience– namely Local 338 of RWDSU, and AFSCME’s District Council 37. “Their dedication” Buffenbarger said, attested to the strength that unites the Machinists “with the New York community and the entire American labor movement.”

After speaking, Mr. Buffenbarger and Mr. Roach continued onto Memphis, TN, where a group of supporters awaited them in the second of their six stops on the nationwide organizing drive. En route to the tarmac at JFK, Mr. Buffenbarger acknowledge that Machinists are “quite familiar with what it means to do heavy lifting,” but that the task of lifting new coworkers up to a unionized status requires an extra degree of effort—an effort that owed special thanks to the energy, enthusiasm, and support offered by New York Labor.

Amazon and the Exploitation of People of Color