The City Council continued hearings on Mayor Bloomberg’s FY 2013 Preliminary Budget on Thursday, March 29, as the Council’s General Welfare Committee questioned the Administration for Children’s Services’ staff why are there cuts being proposed for the subsidized child care system.

According to the Committee, chaired by Council Member Annabel Palma of the Bronx, the Mayor’s preliminary budget does not include the funding the administration and the City Council restored to the subsidized system in FY 2012, which once again jeopardizes the critical daycare services low-income families depend upon.

Stephanie Gendell, an executive director at the Citizens’ Committee for Children of New York, said that unlike last year, when Mayor Bloomberg and the City Council agreed to restore $82 million for child care services, this year’s EarlyLearn RFP increases the essential amount to $104 million to forestall a cut of 8,200 child care slots for day care centers and 7,700 vouchers for families to pay for child care services. 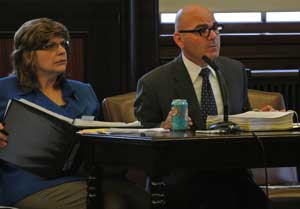 She also noted that, “ACS conducted a needs assessment in 2008 and found that only 27 percent of eligible children were being served. With the proposed cuts stemming from the EarlyLearn RFP, the percentage now will be lower.”

Council Member Julissa Ferreras of Queens said on the steps of City Hall before the hearing commenced, “We need to prevent the child care cuts because it doesn’t matter how many jobs come to New York if families don’t have somewhere to take care of their children.”

She added, “Its five consecutive years that we have had to push back against proposed cuts to social services.”

The only way to ensure that money is available for critical social services is that the money be baseline in the budget. Palma noted that the Council has requested the administration for baseline dollars, but each year the council has had to provide a stopgap by shifting dollars from another agency or project to fund child care services.

The new ACS Commissioner, Ronald Richter, appeared before the Committee and fielded questions from the council members mostly concerning EarlyLearn.

He told the Council that “the primary goals of EarlyLearn NYC are to better support working parents and to offer high quality care regardless of setting and program design.” He also noted that one of EarlyLearn’s critical components “include extending program hours so that parents receive a minimum of eight hours and up to 10 hours of care per day.”

Council Member Charles Barron of Brooklyn first told Richter, “I’m concerned about childcare services, particularly as it relates to Black and Latino, low-income families. I’m angry because we have to go back to our districts and explain to our constituents that the richest city in the world, with a budget that’s larger than 48 state budgets in the United States and twice as large as New Jersey’s, can’t come up with a few million dollars to subsidize child care.”

Then Barron asked Richter about a provision in the EarlyLearn RFP that requires providers of child care services, which traditionally have been provided by community-based organizations, contribute about 6.7 percent towards the cost of providing care via a combination of cash and in-kind contributions.

“What are the consequences if the providers can’t cover the 6.7 percent of the service cost and workers lose jobs because the centers have to close?”

“We acknowledge that it’ll be more difficult for some providers than others to cover the cost, and our role will be to help them figure out how to do it,” said Richter.

“You know how a person feels when they were previously receiving five or $6,000 for a voucher will now only be getting $2,700 and have to cough up the rest they don’t have?”

Barron demanded, “We want answers as to how your agency will deal with the impacts from the elimination of slots and closings of centers.”

But all that Richter could say in response was, “I appreciate your concerns about the potential impacts, but I cannot provide you with an answer right now that you’d find satisfactory.”

Council Member Brad Lander of Brooklyn questioned the wisdom behind ACS’ decision to increase the cost of care per seat.

Richter said that the cost is higher because EarlyLearn will be providing greater quality of care, such as supports for mental health, nutrition services and extending program hours.

He noted also, “Part of the answer is that the system is being aged down so that there is more care for infants and toddlers, which is more expensive.”

Richter couldn’t provide the number of infants and toddlers to be served by EarlyLearn, but told Lander and the Council that, “The concept behind EarlyLearn improves access to quality care no matter where you live. That’s not the case now, in our view.”    marc@laborpress.org