Pretty Woman: The Musical: A Bland Show with Box-Office Appeal

Pretty Woman: The Musical is a contemporary stage adaptation of the 1990 movie that made Julia 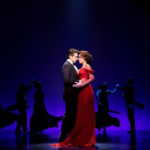 Roberts a star. She played a prostitute, alongside Richard Gere as the businessman determined to demonstrate that she had has a heart of gold.

The Broadway musical, at the Nederlander Theatre, features a book co-written by the film’s director, the late Garry Marshall, and screenwriter J.F. Lawton. It stars Samantha Barks as Vivian, the Julia Roberts role, alongside Andy Karl as Edward, Gere’s character. Their acting and voices are superb.

The music is by Grammy winner Bryan Adams and Jim Vallance, and it’s directed and choreographed by Jerry Mitchell. The costumes, by Greg Barnes, and stage script mimic those in the movie almost verbatim. The scenic design is by David Rockwell, whose sets are also true to the movie.

Pretty Woman was sort of a Cinderella movie, and this musical attempts to be an American My Fair Lady, which it isn’t. Is it entertaining? To a point. Do the songs sizzle? Not quite, since the lyrics are so-so and the music is bland.  But Samantha Barks is outstanding, and Andy Karl is wonderful and is quite charismatic.  Karl’s real-life wife, Orfeh, is quite dynamic as Kit, the call girl’s best friend. Another outstanding player in this mediocre show is Eric Anderson, who plays both a joyful homeless man and an energetic hotel manager who dances up a storm.

Pretty Woman has box-office draw due to the aficionados of the movie who in their minds are viewing Julia Roberts and Richard Gere. If you’re one of them, this is the show for you. If you’re not, it’s probably not worth the high venue costs.