Union members and leaders rallied and then marched in Brooklyn yesterday, March 8 to protest the planned closing of Kingsboro Psychiatric Center and possible closing of inpatient services at SUNY Downstate Medical Center. According to the Public Employees Federation, the potential closures could have devastating effects on health care accessibility for the mostly working poor and immigrant community in central Brooklyn.

Don Morgenstern, an Executive Board Member and SUNY Council Leader for PEF, said that Downstate treats hundreds of thousands of patients per year. The emergency room alone sees 90,000 patients a year.

“If Downstate were to close, it would create a health crisis in central Brooklyn. The other hospitals in the area could not handle the high volume from Downstate,” Morgenstern said.

The possible closing of inpatient services at Downstate would also have a deleterious impact on the hospital’s medical school, which trains numerous health care professionals.

“Our primary function is obviously taking care of patients, but Downstate also has one of the largest medical schools in the country where doctors and nurses work with inpatients to advance their training.” 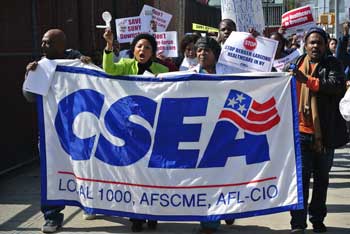 He added, “More doctors are trained at Downstate than any other medical center in Brooklyn, and the entire city for that matter.” It’s already becoming increasingly difficult for doctors to find places to receive medical training. If the inpatient services were shuttered, it would limit doctors’ choices still further, noted Morgenstern.

Also noteworthy, about 90 percent of the doctors trained at Downstate remain in Brooklyn to practice, said Morgenstern. The loss of the medical training at Downstate could possibly contribute to fewer primary doctors and doctors of all specialties practicing in the poorer areas in central Brooklyn where residents need affordable and quality health care services.

According to PEF, the recommendation to close Kingsboro and Downstate’s inpatient services originates with Stephen Berger, Chairman of Odyssey Partners, a private NY investment firm, and Chair of the Health Systems Redesign, a committee appointed by the State Department of Health commissioner to find cost savings in health care in Brooklyn.

Berger, noted Morgenstern, recommended to the commissioner, Nirav R. Shah, that inpatient services be closed at Downstate and transferred to Long Island College Hospital, which is in a more affluent, upper middle-class and white neighborhood where there already is plenty of access to quality health care.

“If the inpatient services were to close, the state would essentially be abandoning the people, mostly black and Latino, who desperately need the services and transferring the services to an area that doesn’t need it,” Morgenstern said.

He also mentioned that the Berger recommendation to close Kingsboro is madness because about 250 patients would be transferred to South Beach Psychiatric Center in Staten Island.

“We’ve estimated that the time it would take for relatives to visit their loved ones in Staten Island via public transportation would be about two and one-half hours, contributing to the stress relatives already feel with a loved one confined to a psychiatric center,” Morgenstern noted.

He added, “Again, if the recommendations go through, Brooklyn, the most populous county in the state, and with the largest need for psychiatric services in the state, will not have a state-supported, long-term psychiatric center. It’s outrageous.”

Not only is health care accessibility for working-class people at stake via the recommendations, but 500 PEF nurses are at risk of losing their jobs at Downstate, as well as CSEA and PEF members at Kingsboro.

Jemma Marie-Hanson, PEF Regional Coordinator and PAC Chair, said that the union is very concerned about the potential closings as Berger’s previous recommendations led to hospital closings in Manhattan.

She believes that by allowing Berger’s recommendations to go through, Governor Andrew Cuomo is showing no respect for the poor and immigrants. She noted that Kingsboro has already been served a 60-day notice to close.

But the union is fighting back against Berger’s recommendations through intensive legislative lobbying. According to Kenneth D. Brynien, PEF’s state-wide President, the entire Brooklyn delegation, including Senator John L. Sampson and Assemblyman Vito J. Lopez, among others, is strongly opposed to the closings.

Only one legislator attended the rally, Assemblyman Nick Perry of Assembly District 58, but he told the union members that, “I want to ensure you that every elected member of the Brooklyn delegation in the Assembly and Senate, even the Republicans, stand with you.”

The union will be going to Albany on Thursday, March 15 to rally and make a final stand to ensure that the Kingsboro and Downstate inpatient closings aren’t in the final state budget.   marc@laborpress.org