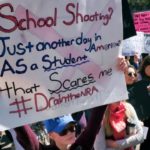 Saturday March 24th for legislators across the country. Change the gun law or be voted out. The shooting on February 14th at Marjory Stoneman Douglas High School left 17 people dead.  So began a movement that has led to a national debate on gun control.

Demonstrations against gun violence were planned across the globe this past Saturday with Washington DC the main center of attraction. About 180,000 people attended Saturday’s rally in DC planned by the students of Marjory Stoneman Douglas. “Welcome to the revolution,” said Cameron Kasky, the first student speaker at this huge ‘March for Our Lives’ event in DC, on Saturday. “My generation has spent our entire lives seeing mass shooting after mass shooting, and that needs to end now.” In New York, 150,000 people were demonstrating in support of the DC March.

The law, which President Trump signed on Saturday as part of the omnibus spending bill, provides funding to train students, teachers and law enforcement on how to spot and report signs of gun violence. It also provides money to improve school security, strengthens the system of background checks on gun buyers, and provides some funding for the Centers for Disease Control and Prevention to conduct research on gun violence. But the law did nothing to regulate gun sales, or to restrict the sale of assault-style weapons like the AR-15. This is far from what the students listed in their demands on gun control.

The Marjory Stoneman Douglas High School students have begun a massive organizing drive across the country to change gun laws in the United States. Their cause is gaining more support each day with legislators beginning to stand up to the NRA.

The changes Parkland Students are proposing include the following:

These weapons were designed for war not target practice.

A database is needed to keep track which guns are sold in the United States. Together with universal background checks, this system would help law enforcement stop a potentially dangerous person before they commit a gun crime.

This channel of communication needs improvement and in some cases laws need to be changed. Those unstable should be prevented from purchasing a fire arm.

Loopholes allow people who otherwise wouldn’t be able to buy firearms to purchase them at gun shows and secondhand sales.

With the exception of those who are serving the United States in the military, the age to obtain any firearm should be raised to 21.

Every school, regardless of size,  needs an armed police officer assigned to the facility.