New York’s unions and Governor Andrew Cuomo are squaring off over pension reform. The Governor wants to reduce benefits to ostensibly save billions of budget dollars, causing consternation among the state’s labor leaders and members. Public pensions were the topic of a roundtable discussion at New York University yesterday, March 13, but the conversation’s import focused on how public pensions can be used as investment tools to build infrastructure projects.

The Office of Public Advocate Bill de Blasio, in partnership with The Fund for Public Advocacy and NYU’s Robert F. Wagner Graduate School of Public Service hosted the event and featured four speakers who spoke about the investment opportunities and risks pension funds face with infrastructure projects.

One of the panelists, Mike Fishman, President of SEIU 32BJ, told the audience how he has been in active discussions with investment professionals to possibly invest a percentage of 32BJ’s Pension Fund into infrastructure projects in the state and possibly elsewhere to achieve better returns while simultaneously providing for the common good. 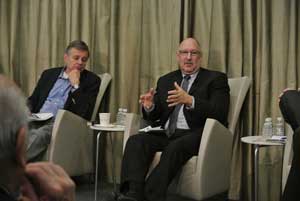 For example, he cited the Ontario Municipal Employees Retirement System, which manages $55 billion in net investment assets on behalf of 420,000 members, as an example of a union pension plan that invests in infrastructure, and as a possible model for 32BJ to use to make infrastructure investments.

He added, “OMERS invests about 20 percent of its portfolio in infrastructure and has demonstrated very substantial returns of 8 to 12 percent over the long term.”

Fishman believes that infrastructure investments can not only benefit his members by ensuring that they have a reasonable pension when they retire after a lifetime of work, but that they can benefit the public.

He cited how pension funds can reclaim assets for the public domain by investing in and purchasing the assets of National Grid (produces electricity and gas for four East Coast states), for example, and use the money derived from operating the system to invest in the system to ensure optimal functioning.

“Currently, the revenue earned from the Tappan Zee Bridge is not dedicated to maintaining the bridge, but goes into the state’s General Fund. If pension funds were to invest in a new bridge, the revenue could be put back into the bridge’s operation, while simultaneously generating a reasonable return,” Fishman noted.

“The opportunities are vast if we were to begin to exercise the will to do things like building electrical transmission lines, tunnels and bridges,” said Fishman.

Another panelist, Steve Lydenberg of Harvard University, said he’s seen both encouraging and discouraging trends in the investment community. The “short-termism” disturbs him because whereas in 1960 the average holding period for institutional investors in stocks was eight years; by 2010, it was six months.

But he’s encouraged by how pension funds are starting to think of the long-term effects of their investments. He noted that pension funds around the world control a whopping $20 to $25 trillion in assets.

Peter Goldmark, Jr., a former budget director for New York State, said that he sees the infrastructure sector as the only large sector that can generate a new round of serious growth that will increase the country’s competitiveness, but stressed the new infrastructure growth has to be “flexible, carbon light, resource conservative and more user friendly.”

Lydenberg highlighted some examples where pension funds could invest. “CalPERS [California’s public employees’ retirement system] is investing a portion of its real estate assets in energy efficiency. The City of Chicago just announced an infrastructure bank capitalized at $200 million, and hoping to attract $1 billion, to invest in energy efficiency and the West Coast Green Highway will advance the adoption and use of electric and alternative-fuel vehicles along the I-5 corridor from California to British Columbia.”

But Lydenberg also said that “these infrastructure investments must be structured to really benefit the common good for the long term. The danger of pension funds turning over the responsibility of their investments to intermediaries is that they lose the ability to determine which investments to make or not make.” marc@laborpress.org“