On Top of the World With The WTC’s Crane Operators

By Marc Bussanich and Joe Maniscalco 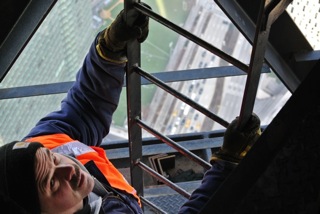 You’d think that a crane operator sitting in a machine near the top of the Western Hemisphere’s tallest building could master any fear of heights. But crane operator Tommy Gordon is scared to work on the roof of his own house.

“I’m scared to death of heights," Gordon says. "I hate them. My wife always jokes that I can work up in the air, but can’t stand tall on our own roof."

As member of Local 14-14B of the International Union of Operating Engineers, Gordon, 48, erected the first steel girder for the new World Trade Center six years ago. But when it came time this past summer to paint the chimney on his Levittown, Long Island home, he declined and instead passed the job off to a nephew who owed him a favor.

A walk into the crane’s cab reveals a panorama of New Jersey and an uneasy view of the West Side Highway some 1,400 feet below the controls. As incongruous as it seems for a man that despises heights, this is Gordon's office.

“I’m at my game when I’m sitting in that cab hauling rebar,” Gordon says.

A 19-year industry veteran with 10 of them operating cranes, Gordon was actually out of work following a knee operation, when the "job of a lifetime" at the World Trade Center became available after another crane operator unhappy with the uncertainty of the early project decided to leave.

"The industry was booming then," Gordon says. "People left for other jobs. I was only supposed to be here two weeks, set that piece, and the job would shut down. But I stuck around on different pieces of equipment and I've been here ever since."

Gordon and his fellow WTC crane operators honed their skills working with the best in the business, which years later, ultimately prepared them for the biggest reconstruction project in the city – and a building whose design in many ways is totally new to New York.

They all feel a great sense of pride working at One WTC, and like everyone else, they’re looking forward to the project’s completion – but not without some lament.

On the day these reporters were escorted to the 102nd floor to witness a 50-ton tower crane hoist rebar, and ironworkers welding steel, the crane's 230-foot boom was also being disconnected from its moorings.

“It’s nice to see that the project is almost done, but it is sad to see my boom coming down,” Gordon says. 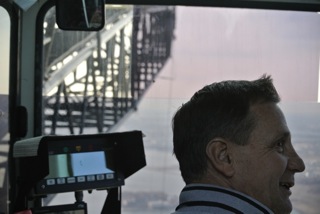 When the WTC project was humming at full tilt, it wasn't uncommon for crane operators like Gordon to start climbing up to their dizzying perches at 4:30 in the morning, and keep the cranes running all day until about 5:30 or 6 o'clock at night. Sometimes, in weather conditions that would prevent most from climbing out of bed, let alone ascending to the top of the world.

"One day, I left down here and it was drizzling out," Gordon says. "It took about 20 minutes to get up to the crane. But when I got there, we had to shut down because it was like a whiteout. You couldn't see two feet passed the window."

On the third day of 2013, 28 degrees Fahrenheit and 5 mph winds prevailed on the ground below One WTC – but the elements intensified at 1,400 feet where glass windows were being installed on the 90th floor.

“This is the last warm spot you’ll feel before we walk onto the crane on the 102nd floor," Master Mechanic Kenny Klemens says. "You’ll think you were standing in front of a fireplace on the 90th compared to the temperature on the 102nd."

Klemens started his building trades career as a sandhog before deciding he preferred soaring heights over subterranean depths. His office is a comparatively cushy construction site trailer at the base of One WTC where diagrams of the 187-foot reinforced concrete shear-wall core and 408-foot spire hang on the walls. He’s been escorting visitors throughout the complex since construction on One WTC began -including President Obama.

"Part of the complexity of the project, was putting in the foundations for everything that you see with an active subway line and the PATH train active as well," Klemens says. "A lot of people were curious about the delays and why it's taken so long. Well, it's difficult to build foundations for four offices towers and a major transportation hub through active train lines. M 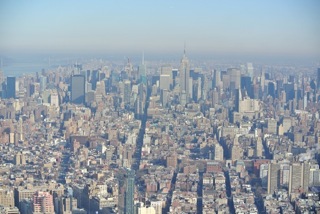 e, personally? I think they've accomplished quite a lot."

The wind lashes you as you step off the elevator, but then you're greeted with an awe-inspiring view that all New Yorkers will soon be able to experience when the complex is completed.

Gordon and Klemens are asked how they deal with the enormous responsibility of operating a crane in New York City, one of the most difficult places to build thanks not only to underground subway lines, but extra tight spaces between buildings competing for valuable real estate.

“A lot of training,” they say simultaneously.

Each notes that it takes many years before a tradesman has the skills to operate a 50-ton crane.

“You need to find and work with a skilled operator on different types of jobs before you can feel comfortable working at high elevations,” Klemens says.

Icicles form on the floor next to piles of construction equipment and feel like they're going after the ear lobes next, when the crew working outside the 102nd floor takes a coffee break and Klemens gives the signal to approach the crane affixed to the side of One WTC.

“You cannot drop that helmet,” he warns. “Someone on the ground could be killed.”

Walking across what seems like a plank leading to an ocean abyss,  you can't help but take a quick glance at the vehicles flowing along the West Side Highway well over a thousand feet below.

The metal ladder up to the cab is bitingly cold and greasy. Despite multiple layers, the winds beat the flesh. But step off the top ladder rung, and here's the crew of ironworkers casually drinking their coffee as they closely examine their guests.

Bobby Friberg, 58, is inside the warm and cozy cab dressed in a grey flannel shirt with a jar of peanut butter nearby, totally immune to the elements outside, and epitomizing Klemens' description of an "even tempered" crane operator who "never stops learning." He’s been operating cranes in New York for 25 years, but was scratching his head the first time engineers showed him a schematic of One WTC’s construction, and the specially-designed "slider crane" that actually crawls up the side of the building like Your Friendly Neighborhood Spider-Man.

“I’ve never operated a crane alongside a building, but the engineers told us they designed similar buildings in other countries, Friberg says.” We’re really impressed with the engineering."

Architectural Record describes the building construction this way: "From the 20th floor upwards, the square edges of the 1,776-foot tower’s cubic base are chamfered back, creating progressively smaller floor plates that gradually shift from a square above the podium to an octagon at midsection, back to a square at the top, but 150 feet on a side and rotated 45 degrees from the base."

Back on the ground, the boom that Gordon has operated for the past six years is being successfully lowered by the last remaining tower crane. Suddenly, a rainbow appears and majestically frames the descending rig. Building tradesmen dressed in garments and hard hats resembling soldiers ready for battle immediately look up with their smartphones in hand. Everyone snaps a photo.

"It's nice to see it done because for so many years, people asked me why it took so long," Gordon says. "I don't think people understood how much work was involved here. It's kind of like a city underground. It's nice to see it done, but it's also a little sad that it's over after being here so many years. To work here was a once-in-a- lifetime thing. You always had to remember why you were here, and show the proper respect to the site and the meaning of the building. You weren't putting up just any building."

In the warmth of his trailer office, Klemens talks about how every tower crane operator enters the cab with some ambivalence about high altitudes, but slowly gains more confidence after settling into a routine and learning to respect the fear without giving in to it.

The union is full of excellent crane operators, he notes, some just prefer to stay grounded rather than suspended.

“Yes, operating this kind of crane is not for everybody," Klemens says.