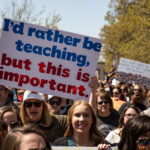 saying they had won as much as they could of their demands for better pay and more school funding. But teachers in the state’s largest city will stay out at least through Monday.

“We were able to secure $479 million in education funding for next school year. The legislature, however, has fallen well short of its responsibility,” Oklahoma Education Association President Alicia Priest said in a statement. “We have seen no significant legislative movement since last Friday. OEA leadership has been negotiating in good faith with the House and the Senate, but Senate Republicans won’t budge an inch on any more revenue for public education.  They say they don’t believe Oklahoma students need more funding.”

“We have been at the state capitol for the last two weeks, doing everything we can to try to get as much as possible for the children of Oklahoma City,” Oklahoma City American Federation of Teachers President Ed Allen said Apr. 12. “We are proud of what we have accomplished, but truthfully there’s no one left to negotiate with in the Statehouse.”

The 2,600 members of the Oklahoma City AFT aren’t going back to work yet, however. The union announced Apr. 13 that an online survey about whether to end the strike was compromised by nonmembers voting: Two-thirds of the respondents wanted to stay out, but the number of voters exceeded the number of members.

“Despite the survey problems, there’s a clear indication that people want additional time to try to exhaust every avenue for additional funding for schools,” Allen told local media. The union said on Twitter that classes for Monday, Apr. 16 would be cancelled.

The $479 million in school funding is slightly more than half of the $906 million the OEA demanded before the walkout began Apr. 2. The state legislature voted to increase teachers’ salaries by an average of $6,100 a year, less than the $10,000 raise the union had demanded over three years, but about what it sought for the coming year. Paraprofessionals and support staff will get a $1,250 raise; the OEA had wanted $2,500 this year and $5,000 over three years.

Oklahoma teachers are among the lowest-paid in the nation, and Priest said that “education has been cut more in Oklahoma than in any other state in the country.” It has reduced per-pupil spending by 28% over the last 10 years, according to the OEA, and about one-fifth of the state’s school districts are operating on a four-day week.

Several teachers posting on the OEA’s Facebook page criticized the decision to go back, saying that the legislative package fell short of what they and schools needed and that it guaranteed funding for only one year. “We won’t get a second chance here,” teacher Sara Johnson Small wrote. “We need to secure restoration of education funding now. We won’t get the kind of public support and media coverage if we try to come back every year. As of now, there are no ‘new’ dollars for education. This is just putting back a fraction of what they cut.”

The $479 million in funding for the 2019 fiscal year will cover $354 million in teacher salaries, $55 million to pay support staff, and $70 million in general school aid, according to the OEA. It will be financed by $444 million in new taxes on gasoline, tobacco, and gas and oil production; $84 million from capping itemized deductions on state income taxes, and $20.5 million in an “Amazon tax” on online purchases. Revenue from ball-and-dice gambling is projected to bring in about $22 million in fiscal 2020.

However, Gov. Mary Fallin signed legislation Apr. 10 repealing the $5 tax on hotel and motel rooms, which the OEA wanted preserved so it could raise another $46 million. The legislature also did not consider eliminating the capital-gains deduction on state income taxes, which the OEA projected would have brought in $108 million.

House assistant majority whip Rep. John Pfeiffer (R-Mulhall) told KFOR-TV in Oklahoma City that Democrats and Republicans had agreed not to hear the capital-gains bill in exchange for passing a 5% gross production tax on gas and oil.

Republican state legislators had said they were not going to increase school funding any more this year. “We’ve accomplished a whole lot, and I just don’t know how much more we can get done this session,” Pfeiffer told reporters Apr. 10.

Priest said that the OEA would shift its focus to making public education the main issue in the November elections. “The state didn’t find itself in this school funding crisis overnight. We got here by electing the wrong people to office,” she said. “A record number of candidates have filed for office, including OEA members who will be the best advocates for our students in the Oklahoma Legislature. This fight is not over just because the school bell rings once more and our members walk back into schools.”

In a candidate forum on KOKC radio aired Apr. 8, three of the six Republicans running to succeed Fallin said they would not have signed the education-funding bills she did. “I’m opposed to tax increases,” said Lt. Gov. Todd Lamb, one of the two front-runners in a SoonerPoll survey released earlier this month. “I’m very frustrated and very disappointed in how this teacher pay raise was signed and how it was passed.” Oklahoma City Mayor Mick Cornett, the other front-runner, did not say what he would have done, while Tulsa businessman Kevin Stitt and Tulsa lawyer Gary Richardson also said they would not have signed the package.

State Auditor and Inspector Gary Jones, who ranked sixth in the SoonerPoll survey with less than 3%, said he would have signed the bills because it was the only way to give teachers a raise.