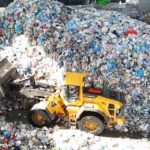 This undermines the New York City’s efforts to achieve zero waste by 2030. Leading cities, such as Seattle and San Francisco, recycle at rates three times higher than the Big Apple.

“The results of this new analysis continue to disappoint. Decades after the obligation for commercial carters to recycle much of the waste they collect, most of the city’s private carters have implemented this policy half-heartedly at best. New York’s commercial carting industry will never come close to achieving the city’s ambitious waste and air quality improvement goals without the kind of dramatic change envisioned by commercial waste zoning,” said Eric A. Goldstein, New York City Environment Director at the Natural Resources Defense Council.

A recent report titled  “A Wasted Opportunity,” documents the industry recycles less of what it takes in, it is sending dramatically more to landfills. The industry’s disregard for recycling undermines New York City’s environmental goals. Mayor de Blasio has committed to achieve “zero waste” by 2030, and to reduce greenhouse gas emissions by 80% by 2050. Emissions from landfills are the third-largest source of New York City’s greenhouse gas emissions, after energy and transportation, making increased recycling rates a key tool in reducing our emissions.

“Millions of New Yorkers know how to recycle at home, but wonder what really happens to the bottles and cans at the local pizza shop, or the dumpster full of paper and half-eaten lunches in their office building’s loading dock,” said Justin Wood, Director of Organizing and Strategic Research at New York Lawyers for the Public Interest. “In spite of new rules requiring businesses and their employees to recycle, more and more commercial waste is being trucked to landfills by the dozens of private haulers who collect from businesses every night.  We believe that the millions of New Yorkers who are concerned about climate change and the environment will applaud the City’s plan to hold these waste companies to a much higher standard as part of the planned waste zone reforms for the industry.”

The City is currently transitioning the industry to a new commercial waste zone system, which would require carters to bid for the right to collect waste in each zone of the city, and allow the Department of Sanitation to set recycling goals that carters must meet. Advocates are urging the City to limit one carter to each waste zone, in order to maximize the opportunity for investment in recycling infrastructure and accountability for carters.