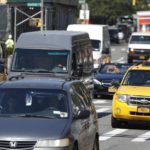 fatalities have dropped 34 percent to the lowest level since record-keeping began in 1910.

“With each passing year, New Yorkers continue to see Vision Zero save lives,” said Mayor de Blasio. “Over the last five years, we have lowered the speed limit, increased enforcement and designed hundreds of safer streets. But no loss of life on our streets is acceptable.”

According to City Hall, the City’s 140 speed cameras have been a key element in the city’s initiative to decrease deaths on the streets of the city. Reducing speeding in school zones by over 60 percent has saved lives.  Despite inaction during the Albany legislative session, where reauthorization of the lifesaving program was blocked, the program was restored on the day before schools opened. Under Vision Zero, cycling has become the fastest-growing transit mode and during 2018, fatalities among cyclists declined to record-low levels: 10, compared to a previous record-low of 12 in 2009 and 2013, when cycling was much less popular. NYPD Traffic officers issued more than 50,000 summonses to drivers who failed to yield to pedestrians or cyclists in 2018. Over the same period, officers issued nearly 150,000 speeding summonses, and automated speed cameras issued nearly 1 million Notices of Liability in 2018.

“Whether by foot, by bike, by bus, or in their cars, it’s essential that New Yorkers can travel around this city safely,” said City Comptroller Scott Stringer. “Vision Zero has spurred real progress and saved dozens of lives. For our students walking to school, seniors heading to their doctors, and all New Yorkers, safe streets are a basic necessity and something we have to continuously work towards.”