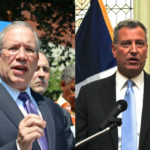 investments of the NYC Pension Funds in climate change solutions to $4 billion or 2% of the City’s $195 billion pension portfolio over the next 3 years.

“New York City leads from the front when it comes to the fight against climate change,” said Mayor de Blasio. “We’re taking a stand for generations to come with our goal to double our pension investments in job-creating climate solutions. I know that other cities will look to our example, and I implore them to join us.”

In order to accomplish this objective, City pension systems will aim to double the existing $2 billion investment across all asset classes to reach $4 billion of investment in renewable energy, energy efficiency, and other climate solutions. This new target builds upon the funds earlier, ongoing goal to divest City pension funds from fossil fuel reserve owners within five years.

“The future is with big ideas in clean technology, not with big polluters,” said New York City Comptroller Scott M. Stringer. “ We’re showing that New York City will continue to lead the way in investing in sustainable investments that offer strong returns for New York City beneficiaries. By pledging to double our holdings in climate solutions we’re becoming an important part of that solution.”

According to Mayor de Blasio, New York City is working to change the paradigm for public pension plans and set a new standard for how asset owners, such as pension funds, can use their substantial investments. Climate change creates both risks to some investments and opportunities for other investments. Specific investments will be reviewed by the pension boards consistent with their portfolio strategies.This was discussed at a city hall press conference September 13th.

“The Teachers’ Retirement System now invests about one percent of its assets in companies and initiatives concerned with renewable energy and sustainable development,” said UFT President Michael Mulgrew. “Our trustees are prepared to work with the Mayor and Comptroller to seek to double such investments consistent with the long-term financial health of the pension fund and their fiduciary duty.”

Climate change poses significant threats to New York City and the world. Rising temperatures; stronger, more destructive hurricanes; and increasing precipitation tied to climate change have already affected communities across the globe. Only by eliminating the use of fossil fuels and reducing the carbon pollution that drives climate change can challenges be fully addressed, said the Mayor.