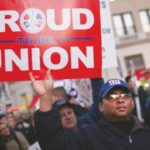 American Federation of State, County, and Municipal Employees, Council 31, et al., to defend a legal right that labor unions view as crucial to their success and survival. The City’s amicus brief, was added to the hundreds of   briefs filed  from across the country.
At issue in Janus is the ability of unions to collect fees (known as “agency shop fees”) from public employees who elect not to join a union but nonetheless benefit from union collective bargaining activities. For over forty years, the Supreme Court has upheld the constitutionality of agency shop fees, but plaintiffs in Janus now seek to change the law and limit union rights.

“New York City is the city it is today because of the hardworking unionized men and women who built it and run it. Our city is stronger because of unions’ ability to organize and fight for all of our rights. Especially in the face of our current political climate, we should be bolstering tools for empowering and protecting workers not making them more difficult to come by,” said Mayor Bill de Blasio.

The City’s brief explains how New York City pioneered collective bargaining for public employees and how the City adopted agency shop fees to protect workers and the public through a fair and effective collective bargaining system. The fees are modeled after successful private-sector labor relations strategies.

“Prohibiting agency shop fees would strip jurisdictions like New York City of a tool that has for years helped foster productive relationships between governments and their public workforces. Agency shop fees have strengthened a collective bargaining process that has worked for us for nearly half a century,” said Corporation Counsel Zachary Carter.

Collective bargaining activities in New York City are time- and resource-intensive and require extensive expertise from both the government and union sides. Agency shop fees finance the provision of tools for negotiation and mediation that help resolve disputes for the benefit of public workers and city residents.

“We are pleased that New York City recognizes the vital role of unions in sustaining its working class and middle class. The Supreme Court case threatens to significantly undermine these protections at a watershed moment when the American middle class is eroding and wealth is concentrating increasingly in the hands of the very few,” said Mark Cannizzaro, President of the Council of School Supervisors and Administrators.

“I’m very happy that Mayor de Blasio and his administration stand with Labor in this battle to protect a system which has been working very well for so many years,” said Harry Nespoli, Chairperson of the Municiple Labor Committee and President of the Uniformed Sanitationmen’s Association, Local 831, I.B.T.