On Aug. 11, union carpenters from New York City hung up their hammers to swing some irons at Crystal 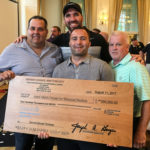 Springs Golf Course in New Jersey, to help support a cause they are well-suited to endorse: constructing wheelchair-accessible homes for injured U.S. veterans.

Allen, then an all-star defensive end for the Minnesota Vikings, founded Homes for Wounded Warriors in October 2009 after he returned home from a USO trip to U.S. military bases in the Middle East. He said he was moved by the commitment, dedication, and sacrifices that our soldiers make every day to protect our freedom, and wanted to say thank you and help make life for wounded vets a little bit easier. The NYC District Council said it could help with what union carpenters do best: building sturdy, beautiful, lasting homes and facilities with their dedication to craftsmanship and safety standards.

“The International United Brotherhood of Carpenters and the New York City District Council have been amazing partners for my foundation,” Allen says. “We have recently begun work on seven projects across the nation, and if it wasn’t for the support from the UBC and the funds raised at events like this one, we would not be able to do what we do. The support from this organization has been invaluable, and I am grateful for the hard work and time everyone involved has put in making this event and this partnership a success.”

“It is an honor to continue participating in such a worthy cause with Jared Allen and his incredible foundation,” says District Council Executive Secretary-Treasurer Joseph Geiger. “The NYCDCC is proud to partner with him in this cause. Our organization has a large number of veterans within its ranks, and is dedicated to supporting our returning service members both within our membership and throughout the country.”

NYC District Council members also recently donated their time and skills to replace the old carpets in the offices of the United War Veterans Council, whose mission is to “mobilize our communities to honor, support, and serve America’s veterans.” Last spring, six of the union’s carpenters joined a group of New York City firefighters in traveling to Denver, N.C. as HEART 9/11 volunteers to build homes for injured veterans there.