Important negotiations between the NY State Nurses Association and two major medical centers in the City will occur today as both sides attempt to reach a new contract. While struggling to protect their health care benefits, NYSNA nurses joined their colleagues from National Nurses United on Park Avenue on December 20, who rallied in front of the offices of private equity firm Cerberus Capital to protest what they claim is the firm’s anti-union activity.

Mark Genovese, an NYSNA spokesman, said that the union and Montefiore, St. Lukes-Roosevelt and Mount Sinai hospitals have yet to reach an agreement on how much nurses should partly pay for their health care benefits. He explained that an arbitrator ruled that there’d be a reduction in nurses’ benefits and they’d be responsible for contributions, but that it’s up to each facility to determine how to implement the ruling. 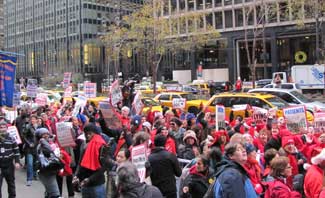 The nurses’ health care benefits were previously financed by their employers, but Jeanne Bernard, a spokeswoman for Mount Sinai Medical Center, said, “The fact is that nurses at Mount Sinai would be paying approximately 20 percent of the monthly cost share paid by other health care professionals at the medical center.”

But Genovese noted that nurses’ jobs are not like everybody else’s job, and there was previously an understanding among hospital employers that nurses would receive fully covered health care because of the stress and physical impairments they developed on the job.

“Nurses are at risk of exposure to contagious diseases, needle sticks and sometimes workplace violence in psychiatric wards. They suffer higher incidents of musculoskeletal injuries than construction workers. The current demands from the employers for givebacks on health care represent a shift in attitude from uprightness to one of ‘You’re on your own.’”

Genovese noted NYSNA supported the NNU rally because, “What happens in Massachusetts can very well happen in New York.”

NNU nurses attended yesterday’s protest against Cerberus Capital Management from as far away as Chicago, Washington, D.C. and Massachusetts, where the company owns and operates 10 hospitals. Carl Ginsburg, an NNU spokesman, explained when a for-profit entity takes over public hospital facilities it has to essentially reimburse the state for funds the state invested in the hospital system, and provide guarantees that it’ll fulfill community health obligations.

But, apparently, Cerberus is not fulfilling its obligations. “In addition to the union, several community and consumer groups have raised new concerns that Cerberus isn’t following through on its promises that health care will be accessible to everyone in the community, the uninsured will be treated and affordability will continue to be a high priority,” said Ginsburg.

Karen Higgins, a NNU co-president and RN, said that promises have been broken. “We’re seeing bad things happen such as cuts to services and care. As nurses, we don’t like the concept of cutting services to patients so that private companies can buy, slice, dice and then flip properties for a major pay out.”

She noted that since Cerberus took over ownership of the Massachusetts facilities, service cuts have compelled nurses to actually bring from home loaves of bread and crackers for patients. In addition, a neurology unit was closed and the former unit’s patients were sent to floors where nurses aren’t trained in neurology, and almost half of the ICU staff was cut, according to Higgins.

In addition to the cuts, Higgins said the private equity company is finding any excuse to fire nurses that are proactive on behalf of patients. “By firing one of us on issues not related to union activity, they’re warning us to stop. Unfortunately, their actions are making us angrier and we’re not going to stop until they understand that patients come first.”

Gabriel Kristal, director of strategic campaigns for Massachusetts Nurses Association, said that the union isn’t necessarily opposed to private companies operating and managing hospitals as there are for-profits who listen to their nurses. “Nurses need to be involved in the decisions about the care they deliver.” However, “Cerberus wants only accountants and bean counters to make decisions.”

Karen Gavigan, a nurse for 20 years at Cerberus-owned Good Samaritan Medical Center in Brockton, MA., said that before Cerberus took ownership, a local board of directors ran the hospital and decisions and improvements were easier to make. “When a nurse retires or leaves, we work short staff until upper management in New York makes the decision to hire or not hire a replacement.”

Cerberus Capital didn’t return phone calls for comment, but Chris Murphy, spokesman for Steward Health Care, a Cerberus affiliate, refuted the union’s claims of staff and service cuts. “Our staffing has been consistent and we’re not closing any facilities.” Rather, the company has invested thus far $100 million to build new space. “We’ve added 770,00 square feet of hospital space in the past year. We’re investing and growing our hospitals,” said Murphy.

He noted also that the essential issue is the nurses union “disagrees with our design of a new defined benefit pension.” Murphy explained that last year the company hired lawyers and actuaries to develop a pension plan within the framework it created. “We submitted the plan to the nurses and they refused it and wanted a new version that didn’t fit within our framework. We can’t give them a pension that we didn’t agree to in our contract because we can’t afford it.”

He said also the union’s actions clearly illustrates an issue around benefits and not quality as, “The day before the rally, the union told us they’d cancel the protest [at Cerberus offices on Park Avenue] if we gave them the pension they wanted.”