Robert Daraio, mobilization coordinator with the New York Newspaper Guild, CWA Local 31003, said that two journalists who write for the New York Times won the esteemed Pulitzer Prize this year, one for writing a series about corporate greed. The bitter irony is, however, that the New York Times Company wants givebacks from the 1,100 members of the Guild who work as journalists, editors, photojournalists, digital content producers and even security guards.

According to Daraio, the local’s members have been negotiating a new contract with The Times for over a year. On Wednesday, April 25 the local held a “dignified silent protest” outside The Times Center during an annual shareholders meeting to express their concern over the company’s lack of movement towards forging a new contract.

Daraio noted some of the contract issues at stake.

“The company wants to freeze the pension plan and replace it with a 401k plan that will result in a value loss of one-third to one-half for our members.”

“With the 401k option the company wants to institute, current members with 10 years and over would get a five percent match from the company, while workers with less than 10 years of service would get three percent.” 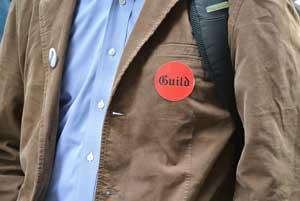 He also noted that even current workers, for example, with eight years of service would not get the five percent match after two years, but would continue to receive only the three percent match.

“Our members haven’t been offered serious wage increases in the Times current proposal. Guild members took a temporary five percent pay cut in 2009 at The Times request to help the company during financially hard times.”

In addition to placing more of the burden on the employees to fund their retirements, the company wants to underfund the health plan. “The company hasn’t increased contributions to the plan for years,” Daraio said.

He noted that the industry-standard for health care contributions by employers is 12 percent, but the company only contributes only slightly more than six percent. The union is asking the company to increase the rate to 12 percent over the life of a five-year contract.

Despite the demand for concessions and givebacks from the union members, “the company paid out a $24 million severance package in January to a failed CEO, Janet Robinson,” noted Daraio.

Although the union does not want its members’ pensions frozen, it is trying to negotiate a deal with the company that would still allow it to contribute at current rates.

“We are willing to work with the company to find ways that helps it reduce its liability and the plan’s volatility by possibly making changes in investment strategy or pension formula, but that expertise should be supplied by pension experts and investment professionals,” Daraio said.

Standing with Guild members outside The Times Center were six members of the Labor Outreach Committee with Occupy Wall Street. A member of the outreach committee said she was participating in the “dignified silent protest” with the Newspaper Guild because it’s “99 Percent Pickets” day, the beginning of the buildup for a massive march and rally on May 1 coordinated by OWS and the city’s multiple unions.   marc@laborpress.org