Stringer again brought together leaders from business and government and community groups to address the new challenges and find new solutions. The Transportation 2030, A Five Borough Blueprint forum at John Jay College featured a plenary panel made up of former Port Authority Executive Director, Chris Ward, and Commissioner, NYC DOT, Janette Sadik-Khan, as well as Robert Yaro, President of the Regional Plan Association and Gene Russianoff, a staff attorney for the Straphangers Campaign.

They discussed and explored new ways to fund the City’s massive transportation infrastructure upgrades and new projects. The federal government passed a 2012 Federal Transportation Bill last week whereby federal highways will get the bulk of the money ($39.1 billion), Federal Transit ($10.6 billion) and zero funding for a National Infrastructure Bank. 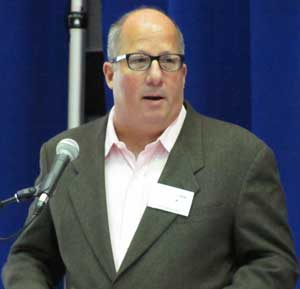 The lack of funding for an infrastructure bank is a major setback for transportation advocates who regarded the bank’s establishment as a critical financing mechanism to pay for the country’s urgent infrastructure repairs and new projects. Chris Ward, who said he’s currently in retirement, spoke presciently at a NY Building Congress meeting back in September that a “National Infrastructure Bank will not be created because the current Congress believes government shouldn’t be spending during a recession.”   The panelists said the first order of transportation business in the City is to make sure that the MTA’s finances are stabilized. Robert Yaro said, “We’ll support Joseph Lhota [MTA’s new president] in his efforts to find new financing to balance the MTA.” While TWU’s president John Samuelsen told his members at the Sheraton Hotel last week that one of the demands the union will press during the ongoing contract negotiations is a “fair wage increase,” Yaro noted that “Joe is going to have to wrestle with the upcoming TWU contract….any dollars that go to labor wage increases is less dollars directed to reducing the debt service.”

While Ward took a lot of heat at the Port Authority for wanting to significantly raise bridge and tunnel tolls, he maintained then, and maintains now, that taxes and/or user fees are necessary to fund the infrastructure that the public and businesses rely heavily upon to get to work and transport goods.

He charged that there is a $25 billion infrastructure gap, and one innovative way to finance this gap is to tax the “goods distribution system that has profited enormously from government investments in infrastructure.”

Ward believes that, since the cancellation of the Access to the Region Core (ARC) project by NJ Governor Chris Christie last year, a new cross-Hudson rail tunnel is essential. He also believes one of the most important transit projects for the Port Authority is the construction of a new bus terminal that’ll increase capacity for buses, which would change the current system of NJ Transit buses delivering riders into Manhattan in the morning but then returning to the Vince Lombardi Park & Ride station in New Jersey, only to return back to Manhattan for the evening rush hour.