“This has been a dream for us,” said Raglan George, Executive Director for DC 1707, the Community and Social Agency Employees Union. The union’s roughly 25,000 members include day care and Head Start workers, home care organizations and educational and social service agencies. 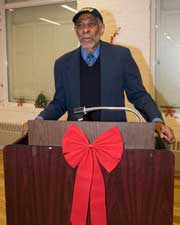 As savage budget cuts threaten union workers across the City, why spend millions to fix up a new headquarters? Good business, according to union leaders. In the darkest days of the financial crisis, the union saw an opportunity to secure a permanent home at an affordable cost — safe from unexpected rent increases.

The last few years have been hard on District Council 1707. For example, Mayor Michael Bloomberg seems committed to closing as many City-sponsored day care facilities as possible — scores of DC 1707 members have lost their jobs. In response, the union has aggressively organized new members. “We’ve been holding on,” said George.

The permanent new home gives the union one less thing to worry about. During the real estate boom, DC1707 suffered with steep rent increases. The union left 75 Varrick Street after its landlord demanded a 20 percent in one terrible year. By 2008, the district council shared the building at 101 Sixth Avenue with 32BJ SEIU. The rent was affordable, but the space was small.

The building on 45th Street was once a Tootsie-Roll factory and, more recently, a sound stage for a video production company. It cost more than $8 million to redevelop the building. The union paid about $2 million. The owner of the building, real estate entrepreneur and philanthropist Jeffrey Gural, paid the rest of the renovation cost.

“It was just the right time to make a deal,” said George. “The building was just sitting here empty. It was going to fall apart.”

DC1707 will pay $900,000 a year to rent the building for the next ten years, but the union plans to sub-lease several floors of the building to other unions. That will cut DC 1707’s share of the rent down to just $450,000 a year. That’s significantly less that the union paid for its old space on Varrick Street — even before the old landlord’s proposed rent increase. DC1707 has ability to extend the lease on its new headquarters for two five-year periods, with a slight, adjustment for inflation. The union also has the option to buy the building for $20 million.