The 420 nurses at Flushing Hospital have been negotiating with management for a year for a new contract, but the nurses just authorized to strike on February 7 because the hospital refused to sign an interim agreement after the contract expires to continue to fund the nurses’ pension and health care plans.

Mark Genovese, spokesman for the New York State Nurses Association that represent the Flushing nurses, said that the main dispute over the past year is that MediSys, a NY not-for-profit corporation that operates Flushing, Jamaica and Brookdale Hospitals, wants to make changes to the nurses benefits.

He explained that changes to the health care plan could potentially cost each nurse about $4,800 per year as the company wants nurses to pay $400 per month for families of four or more and $100 per month per person for the first four individuals of a family. 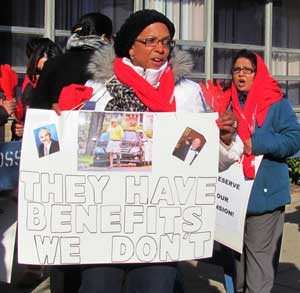 On pensions, Genovese noted that the company’s demand for changes could potentially cost each nurse $150,000 in lost income.

What’s worse, Genovese said, are the tactics the company is using. For example, rather than sign an interim agreement that would continue to fund the nurses’ benefits after the contract expiration, the nurses will lose their health care benefits after 90 days and as of January 1 they are no longer participants in the pension plan, which will prove disastrous for new nurses not vested because they will lose their contributions.

Other insults to the contract include additional concessions, such as no wage increases over the course of a new contract, eliminating paid time-off, reducing personal days, eliminating the flex schedule, removing contract language to restrict floating which ensures that there is proper staffing in each unit, reducing sick leave and paying no OT when a nurse calls in sick during her weekly schedule.

NYSNA is just coming off resounding victories with four major medical centers in the city, but Flushing’s demands are harsher because costs will be higher for the nurses, according to Genovese.

Irene Flores, who’s been working at Flushing Hospital for 33 years, said she voted yes to authorize a strike with a very, very heavy heart. She voted no back in the 90s when the company demanded excessive concessions such as no pay raises for six years to climb out of bankruptcy. She voted yes this time because she’s angry and saddened that the nurses made a lot of sacrifices previously that helped the company return to profitability.

“It’s not fair to ask nurses who just want to take care of patients to be asked to keep giving back,” Flores said.

She also said that nurses never want to go on strike because they don’t want to abandon their patients, but that the company left them with no other choice.

“Flushing is a great community hospital. We are the backbone of this whole operation. We advocate for our patients, many of whom are hard-working immigrants.” While the company claims it is not making money, Flores said that because other community hospitals, like St. Johns, have closed in recent years, Flushing Hospital now serves patients from other communities such as Forest Hills.

There are four more scheduled negotiations before the February 7 strike date, with both sides set to meet next on Monday, January 30.

Michael Hinck, Associate Director of Public Affairs for Flushing Hospital, would not respond to questions, but wrote in an e-mail that, “Flushing Hospital Medical Center will resume its negotiations with NYSNA next week. Flushing Hospital seeks to reach a fair agreement with its staff who are members of NYSNA.”